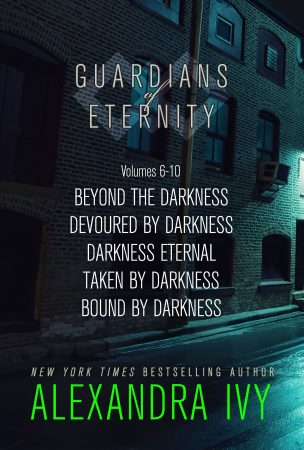 Part of Guardians of Eternity

BEYOND THE DARKNESS
As leader of his werewolf pack, it’s Salvatore Giuliani’s duty to track down the pureblood females who can keep his people from extinction. But the moment he catches scent of Harley, his savage need for her obliterates all other instincts. And the only thing worse than being captured is finding that beautiful, independent Harley defiantly refuses to become his mate . . .

DEVOURED BY DARKNESS
Tane is a Charon, sworn to hunt and kill rogue vampires. His new assignment seems like a waste of his talents. Half human, half demon, Laylah has a vulnerable streak that strikes right through to Tane’s cold heart. He should be furious when she uses her powers to bind them together, instead he welcomes any reason to stay close enough to touch, to taste, to seduce . . .

DARKNESS ETERNAL
After being held captive by one vampire for four centuries, Kata had no intention of taking another one to the underworld with her. Yet even in the pits of Hell, there’s no ignoring the intoxicating desire awakened by Uriel’s touch . . .

TAKEN BY DARKNESS
The daughter of a witch, Juliet Lawrence has inherited magical powers—powers that could be quite useful to Victor, Marquess DeRosa, London’s most powerful vampire. But that’s not all Victor desires of Juliet. He wants the unpredictable beauty in his bed—and he is accustomed to getting what he wants . . .

BOUND BY DARKNESS
Jaelyn is a stunningly beautiful, utterly lethal, elite vampire warrior sent to capture Ariyal, a Sylvermyst who puts up zero resistance. In fact, she knows that what’s sparked between them is far more dangerous than simple lust. And as they unite to thwart a terrifying prophecy, she will risk everything to fulfill her destiny by his side . . . 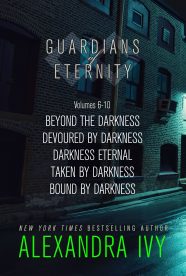 BEYOND THE DARKNESS
START READING from Beyond the Darkness, Book 6 in the Guardians of Eternity series.

DEVOURED BY DARKNESS
START READING from Devoured by Darkness, Book 7 in the Guardians of Eternity series.

TAKEN BY DARKNESS
START READING from Taken by Darkness, Book 9 in the Guardians of Eternity series.

BOUND BY DARKNESS
START READING from Bound by Darkness, Book 10 in the Guardians of Eternity series.

Guardians of Eternity Bundle 2 is available in the following formats:

Not available in print