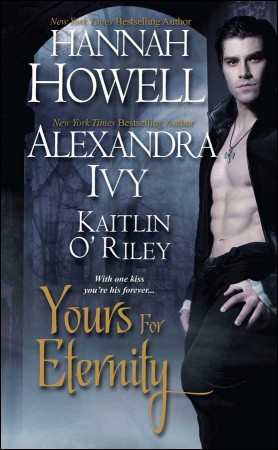 Book 7.5 in Guardians of Eternity

In this sizzling new collection, three women fall under the spell of three irresistible vampires who promise to satisfy their every desire…

Taken by Darkness– by Alexandra Ivy

The daughter of a witch, Juliet Lawrence has inherited magical powers-powers that could be quite useful to Victor, Marquess DeRosa, London’s most powerful vampire. But that’s not all Victor desires of Juliet. He wants the unpredictable beauty in his bed-and he is accustomed to getting what he wants…

When Adeline Dunbar finds an abandoned baby on her doorstep, she sets out to find his clan. Attacked by a group of demon hunters, Adeline tries to flee her rescuer, vampire Lachann MacNachton. But escaping Lachann proves useless-as does denying the primal hunger he stirs deep within her-

Beautiful widow Grace Sutton is haunted by recurring dreams of a past life and a mysterious, handsome stranger. When Grace meets Stuart Phillips, Lord Radcliffe-the vampire who has been searching for her for over a century-her sensual dreams soon come true in the most unforgettable way- 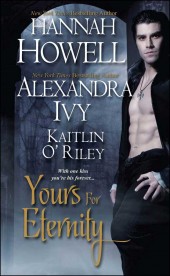 The townhouse situated in the heart of Mayfair was predictably beautiful.

Located close to Hyde Park it boasted a columned portico, as well as a large terrace that overlooked a tidy garden with a gazebo.  The windows were high and arched, spilling light onto the cobbled street that was clogged with expensive carriages.  Along the roof a row of marble statues peered down at the arriving guests, impervious to the chill in the late April breeze.

The interior was equally elegant.

Acres of marble with gilt molding and crimson wall panels, and furnishings with just a hint of the Egyptian influence (an unfortunate fashion introduced by the Prince Regent).  There was also a profusion of artwork chosen more to impress society than any genuine appreciation.

Upstairs the ballroom was a blaze of color as the guests twirled beneath the glowing chandeliers, the room so crowded that it seemed as if all of England was in attendance.

In truth, Lord Treadwell’s spring ball was the unofficial beginning to the London Season, and one of the most sought after invitations of the entire year.  Mothers threatened to toss themselves into the Thames if their daughters were not among the fortunate debutantes on the guest list and politically ambitious gentlemen had been known to offer discreet bribes just to step over the threshold.

It was a collection of the most stylish and powerful bluebloods in all England, but as one they came to a breathless halt as the latest guest swept through the double doors and regarded the crowd with a bored gaze.

Victor, Marquis DeRosa, was worthy of their attention.

Although not a large gentleman, he possessed the sort of sleek, chiseled muscles that were shown to perfection in his tailored black coat and white satin knee breeches.

His countenance was carved along noble lines with a wide brow, an aquiline nose, and a full mouth that could harden with cruelty or soften with a sensuous promise.  His hair was as dark and glossy as a raven’s wing, and allowed to fall to his shoulders rather than being cut a la Titus as many of the young bucks, contrasting sharply with his pale skin.

But it was his eyes that caught and held the attention of most.

Pure silver in color, they were rimmed with a circle of black and so piercing that few would dare to meet his gaze.  They were the eyes of a predator.  A ruthless hunter that considered humans prey.  And a mere glance was enough to make poor mortals tremble.

They might not comprehend why they reacted so strongly to the sophisticated Marquis DeRosa, but they instinctively bowed to his will.

A small, mocking smile curved Victor’s lips as he prowled toward his host and hostess who were fluttering with a panicked delight at his unexpected arrival.

After all, Victor had been in Venice for the past six months, only returning to London the evening before.  No one was aware of his presence in the city.  Besides, he rarely condescended to attend such tedious human parties even before leaving London.

As the clan chief of the London vampires, he was the most powerful demon in England.  He had only to lift his finger to have an entire harem of beautiful females, human or demon, to sate his hungers.  For blood or sex.

And as for entertainment…

After six centuries of indulging in the most exotic and rare pleasure to be discovered throughout the world (from being the only male on an island filled with female wood sprites, to pitting his strength against the lethal Yegni demon) a mundane human ball was laughably dull.

Yours For Eternity is available in the following formats: