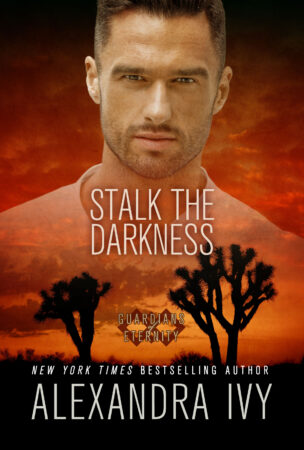 Book 19 in Guardians of Eternity

Becoming a vampire nearly killed Satin. After decades in hiding to reach fighting strength, she swore never to be weak again. Instead, she flings herself into the joys of life. Like “combat practice” with Marco, the owner of the wildest club outside of Chicago. Getting a workout with the sizzling Were is the ultimate no-strings-attached pleasure. Until a chaos-strewing demon leaves Satin with an impossible, infuriating diagnosis: Vampires don’t get pregnant.

Marco prides himself on being the perfect Were—strong, savage, and barely housetrained. But with Satin gone on her mysterious quest, he’s compelled to follow. This raven-haired warrior might be his mate for all eternity. But a dark presence hovers around her. If Marco and Satin can’t solve its riddle in time, there won’t be any future to worry about . . . 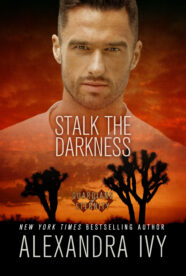 Every demon in Chicago could recognize Satin. It wasn’t just the fact that she was a stunningly beautiful vampire with thick black hair that tumbled down her back and a pale face dominated by eyes the precise shade of aged cognac. Or that she managed the Viper Pit, the most exclusive demon club in the city. It was the thunderous power that vibrated around her reed-slender body. The sort of power that was usually reserved for a clan chief.

Her notoriety meant that she was rarely challenged. By anyone. Something she appreciated when she was working, but it did ensure that there wasn’t much variety in her life.

Standing at the edge of the clearing, Satin absorbed the pulse of her surroundings. If her heart could beat it would be thumping with excitement. Instead, it was her fully extended fangs that throbbed in anticipation.

The night air was laced with the scent of her prey. A rich male musk that was unique to pureblooded Were. It whispered of power and sex and the most delicious pain. Relishing the raw, primitive sensations that vibrated through her, Satin stepped out of the thick fringe of trees and allowed the moonlight to bathe her in silver.

When she’d first sought out this secret club that sprawled over a hundred empty acres an hour south of Chicago it had been to scope out the competition. Viper, the local clan chief, and owner of the Viper Pit wasn’t a male who shared his territory. If the Were was attempting to steal their customers, then she would shut him down. Permanently.

It had only taken one visit to realize that the Hunting Grounds was nothing like Viper’s club. There was no elegant building, no plush booths, or beautiful waiters delivering the finest champagne while soft music played in the background. This place was woodlands and overgrown fields and meadows that were shrouded in layers of magic. The demons didn’t come her to mingle or seek their eternal mates. They came to hunt and fight and enjoy meaningless sex with complete abandon.

Even better, the owner of the club, Marco, had strict rules that kept the bloodshed to a minimum. Every guest was there of their free will and any of them could call a halt to the game whenever they wanted.

It was a place for the most powerful demons to test their strength against each other without fear of lasting consequences. And if the night ended with a bout of sizzling sex…so much the better.

Which was exactly why Satin had returned over and over again. There were few creatures who could match her in a one-on-one battle. Perhaps Viper or Styx who was the current King of Vampires. And there were even fewer demons could stir her icy passions to a fever pitch.

On cue, a large male joined her in the clearing.

She hissed, as always stunned by the sight of Marco. Even for a pureblooded Were he was tall with broad shoulders and muscles that rippled beneath his white silk shirt and black slacks. His dark hair was cut short, emphasizing the chiseled symmetry of his features and his eyes that were as dark as the pits of hell and circled with a rim of shimmering gold. It was the brutal heat and savage strength in the air when he was near that enticed Satin. He was not only the local pack master, but he was a cousin to Salvatore, King of Weres.

In more ways than one.

Stalk the Darkness is available in the following formats: