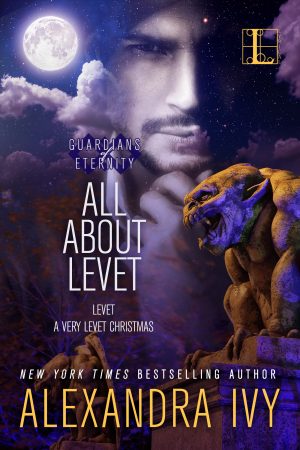 Book 15.5 in Guardians of Eternity

LEVET
Gargoyles do not admire difference—and Levet is undeniably different. Of miniscule stature, rather beastly looks, and with fragile, delicate wings, even his family has shunned him, banished him from his beloved Paris. That he is the only gargoyle ever to help defeat the Dark Lord and his hordes of minions makes no impression. But now Levet has come home, determined to be restored to the official Gargoyle Guild. To do so, he must confront the most feared gargoyle in all of Europe. The one who tried to kill him as a child: his own mother . . .

With few allies, Levet’s survival may depend on the aid of two strangers: Valla, a beautiful but damaged nymph, and Elijah, the fiercely possessive, love-struck vampire clan chief to whom she can’t quite surrender—unless Levet has something to do with it . . .

A VERY LEVET CHRISTMAS
A gargoyle of Levet’s charm and intelligence should not be facing a solitary Christmas. True, he may appear a little unconventional—even for a gargoyle. But what Levet lacks in height he makes up for in loyalty, and being banned from the festivities surrounding the Queen of Weres’ new pups is quite unfair.

So when a beautiful Christmas angel begs for help in fulfilling her duties, Levet is available. Armed with a magical wand, Levet confronts Damon, a pureblood Were intent on seizing the throne.  Challenging the King will put the pups at risk—and drive away Damon’s potential mate, Gia. Who better to convince Damon to choose love, not war, than a gargoyle expert in amour? . . . 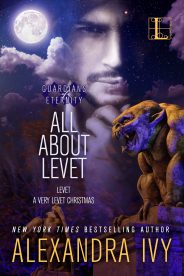 Something inside of him seemed to bloom as he savored the sights and sounds that he’d been denied for so long. He loved Paris. It was the city of his birth.

And the city where his greatest enemies resided. Enemies who also happened to be his family. His sense of homecoming vanished like a bubble being popped.

With an effort, he squashed the painful recollections and reminded himself he was no longer that frightened enfant. Far from it. Just a few weeks ago he’d stood up to the baddest of the bad.

He heaved a rueful sigh, not quite as grateful as he should be. The pretty, flighty, lethally dangerous female demon was enough to make any poor man’s head spin. For weeks she’d lead him on a merry dance, appearing and then disappearing.  Kissing him one minute and slugging him on the chin the next.

What male did not love the danse de l’amour? But after she’d rescued him from the cellar of the warehouse where he’d halted the looming apocalypse, she’d taken him to her cozy little home.

Fire.  Brimstone.  Ghouls. And a full-blood Jinn as a next door neighbor. Not the most comfortable place for a gargoyle who was never so happy as when he was soaring across a star-spangled sky.

All About Levet is available in the following formats: