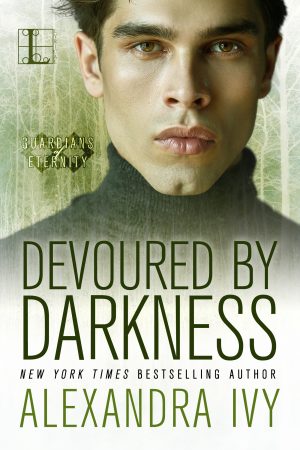 Book 7 in Guardians of Eternity

Tane is a Charon, sworn to hunt and kill rogue vampires. His new assignment seems like a waste of his talents…until he catches up with the Jinn he’s been sent to capture. Half human, half demon, Laylah has a vulnerable streak that strikes right through to Tane’s cold heart. He should be furious when she uses her powers to bind them together, preventing him from dragging her before the Commission. Instead he welcomes any reason to stay close enough to touch, to taste, to seduce…

Laylah doesn’t know why she was chosen to protect a child who may be the catalyst in a war between good and evil. But the mysteries of her past pale compared to the dangers approaching. Tane is devastatingly strong, breathtakingly sensual. And Laylah will have to trust in every ounce of that strength, because her enemies are drawing near, eager to destroy them both… 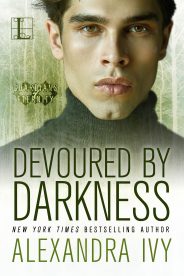 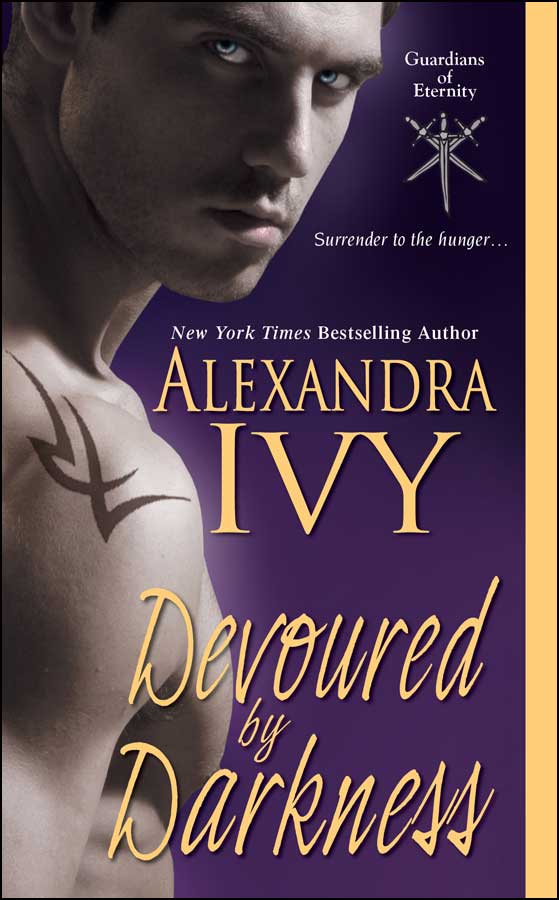 She was tired of the dark, cramped tunnels sprawling beneath the northeast corner of Missouri that she’d been running through for the past two days.  She was tired of being chased by an enemy she couldn’t see.  She was tired of her stomach cramping with hunger and her limbs screaming in protest at her relentless pace.

Reaching a small cavern, she came to an abrupt halt, shoving her fingers through the short, spiky strands of her brilliant red hair, her black eyes searching the shadows for her pursuer.

Not that she expected to actually catch sight of the frigid pain in her ass.

Vampires not only possessed supernatural speed and strength, but they could shroud themselves in shadows, making them impossible to sense, even to most demons.  It was only because she had the power of Jinn blood running through her veins that she could detect the relentless leech following her mad dash through the tunnels.

What she didn’t know was…

She shivered, her mouth dry.  Christ.  She’d thought she was being so clever when she’d initially allowed the vamp to catch her scent.  She’d hoped to lure him, along with the other intruders, away from Caine’s private lair.

Not that she gave a damn about the cur, but she’d hidden her most precious treasure at his estate, and she couldn’t afford to allow any creature with the superior senses of a vampire, or even a full-blooded Were, near her secret.  She’d thought the demons would give chase for a few hours and then grow tired of the game, hopefully returning to Hannibal or even St. Louis.

But her hasty plan had fallen apart right from the start.

The Were had continued on his path to Caine’s lair, and the vampire had refused to give up, no matter how far or how fast she’d run.

Now she was too weak to call upon her shadow walking powers, and too far from Caine to call for his help.

“Oh, screw it,” she muttered, planting her hands on her hips and tilting her chin in unspoken defiance.  “I know you’re following me, vampire.  Why don’t you just show yourself?”

A warning chill thickened the air, prickling painfully over her skin.

“You think you can give me orders, half-breed?”  A dark, sinfully beautiful voice filled the cavern.

Laylah’s heart missed a beat.  Even with her demon blood she wasn’t immune to the ruthless sensuality that was as much a part of a vampire as his lethal fangs.

“What I think is that I’m done running,” she gritted.  “So either kill me or go chase someone else.”

“Ah.  Then you’re confident you’ve managed to lead me far enough away?”

“Away?”  Laylah stiffened, licking her suddenly dry lips.  He couldn’t know.  No one knew.  “Away from what?”

“That is what I’m wondering,” the dark voice drawled.  “It must be of great importance.”

Laylah forced herself to suck in a deep breath, refusing to panic.  The stupid vamp was simply trying to press her buttons.  Everyone knew that they loved to toy with their prey.

“I don’t know what the hell you’re talking about.”

“Hmmm.  Have you ever watched a quail?”

She felt unseen fingers brushed her nape, the cold touch ironically sending a bolt of heat straight to the pit of her stomach.  She whirled around, not surprised that the predator had disappeared.

“The bird?” she rasped, belatedly wishing she was wearing more than a pair of cutoff jeans and a muscle shirt.  Having so much skin exposed was making her feel oddly vulnerable.

Not that clothing would halt a determined vampire.

It wouldn’t matter if she were dipped in cement and wrapped with barbed wire.

“When a predator approaches the nest, the mother quail will feign a broken wing and dash away to lure the danger from her chicks,” her tormentor murmured, his voice seeming to speak directly into her ear.

She instinctively stumbled backward, her mouth dry with a sudden fear.

“The only quail I care about are baked and served on a bed of rice.”

“What are you trying to protect?”  There was a deliberate pause.  “Or is it who?”

“I don’t know what the hell you’re talking about.”

“Is it a lover?  A sibling?  A child?”  His soft chuckle grazed her cheek as the sharp leap of her pulse gave her away.  “Ah, that’s it.  Your child?”

Laylah bunched her hands into fists of frustration.  He was getting too close.  She had to distract the bastard.

“I thought vampires were known for their courage,” she deliberately taunted, willing to risk a battle she couldn’t win if it would keep her secrets.  “Are you such a coward you have to hide in the shadows?”

The chill thickened, the danger a tangible force in the air.  Then, the shadows directly before her stirred, and the vampire slowly became visible.

Laylah reeled, feeling as if she’d just been punched in the gut.

All vampires were beautiful.  And sexy.

Reminding herself to breathe, Laylah allowed her gaze to skim over the elegant features that revealed his Polynesian ancestors, lingering on the slanted eyes that were a brilliant shade of honey and the inky black hair that had been shaved on the sides, leaving the top to form a mohawk that fell past his broad shoulders.

Her gaze lowered, that vicious awareness twisting her gut at the sight of his half naked body barely covered by a pair of khaki shorts.

Had he deliberately left his body on full, wondrous display?  After all, he had to know it would make her fingers twitch with the desire to investigate the smooth muscles of his chest.  Or wait… maybe she would go down the flat plane of his stomach…

Lost in her helpless response to his sensual beauty, she was jerked back to the danger of her situation as the demon stepped far too close, his fingers casually stroking along the curve of her neck.

“Have you never been told the dangers of provoking a vampire?” he murmured.

A chill inched down her spine, but she forced herself to meet his hypnotic gaze.

“Do you intend to drain me?”

His lips twitched.  “Tell me about the child.”

“It’s yours?”  He paused, his fingers drifting to the pulse that hammered at the base of her throat, an intense concentration etched on his beautiful face.  “No.  Not yours.  You are as pure as an angel.”

Genuine fear speared through her heart.  Damn the interfering leech.

“Leave me alone,” she breathed.

The honey eyes darkened with a dangerous hunger.  Laylah wasn’t sure if it was for blood or sex.

“A beautiful angel,” he husked, his arms wrapping around her to yank her hard against the strength of his body.  “And I have waited too long to have a taste.”

Unable to halt her panic any longer, Laylah’s unpredictable powers lashed out, the electrical charge that filled the air enough to make the vampire leap back in wary surprise.

“I said, leave me alone,” she hissed, wrapping her arms around her waist.

Devoured By Darkness is available in the following formats: