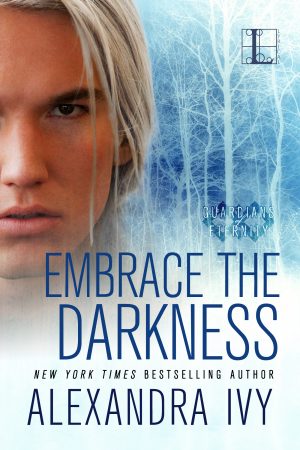 Book 2 in Guardians of Eternity

Lady Shay is the last of her kind. Half human, half Shalott, her blood is a precious aphrodisiac to vampires, who consider it more precious than gold.  hough Shalotts are renowned assassins, a curse held over Shay lands her on the slave auction block, where her fate is uncertain…

Viper, the beguiling chief of a deadly vampire clan, can’t explain his longing to possess the beautiful Shalott who once saved his life, but now he is free to do anything he wants with her.  Strangely, while he desires both Shay’s blood and body, he wants her to surrender willingly.

A hidden evil has been stalking Shay since she left the slave market with Viper.  It is an evil that endangers the very existence of Viper’s kind, and there’s no reason he should court such danger just to protect a Shalott.  But the love he feels for Shay is enough to make him willing to go to hell and back if it means spending an eternity with her in his arms… 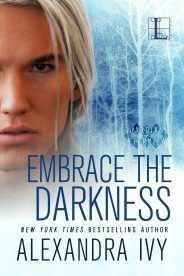 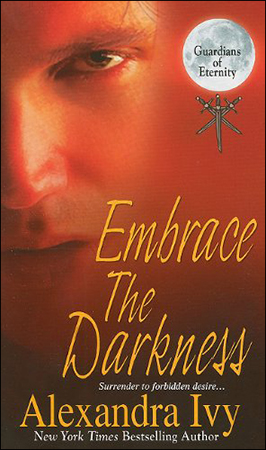 The auction-house on the outskirts of Chicago didn’t look like a cesspit.

Behind the iron fences the elegant brick structure sprawled over the landscape with a visible arrogance. The rooms were large with vaulted ceilings that boasted beautiful murals and elegant chandeliers. And on the advice of a professional they had been decorated with thick ivory carpets, glossy dark paneling, and hand carved furniture.

The overall atmosphere was the sort of quiet hush that only money could buy. Lots and lots of money.

It was the sort of swanky place that should be peddling rare paintings, priceless jewels, and museum artifacts.

Instead it was no more than a flesh market. A sewer where demons were sold like so much meat.

There was nothing pleasant about the slave trade. Not even when the trade was demons rather than humans. It was a sordid business that attracted every decadent, demented, slime ball in the country.

They came for all sorts of pathetic reasons.

Those who bought demons for mercenaries or body guards. Those who lusted after the more exotic sex slaves. Those who believed the blood of demons could bring them magic or eternal life.

And those who purchased demons to be released into their private lands and hunted like wild animals.

The bidders were men and women without conscience or morals. Only enough money to sate their twisted pleasures.

And at the top of the dung heap was the owner of the auction-house, Evor. He was one of the lesser trolls who made his living upon the misery of others with a smile on his face.

Unfortunately it would not be today.

Attired in ridiculous harem pants and a tiny sequined top that revealed far more than it concealed, she paced the cramped cell behind the auction rooms. Her long raven black hair had been pulled to a braid that hung nearly to her waist. Better to reveal her slanted golden eyes, the delicate cast to her features, and the bronzed skin that marked her as something other than human.

Less than two months before she had been a slave to a coven of witches who intended to bring Armageddon to all demons. At the time she had thought anything was preferable to being their toady as she helplessly watched their evil plotting.

It was only when she had been forced back to the power of Evor that she understood that death was not always the worst fate.

The grave was really nothing compared to what waited for her beyond the door.

Without thought Shay struck out with her foot, sending the lone table sailing through the air to crash against the iron bars with astonishing force.

From behind her came a heavy sigh that had her spinning to regard the small gargoyle hiding behind a chair in the far corner.

Levet wasn’t much of a gargoyle.

Oh, he possessed the traditional grotesque features. Thick grey skin, reptilian eyes, horns, and cloven hoofs. He even possessed a long tail he polished and pampered with great pride. Unfortunately, despite his frightening appearance he was barely three feet tall and worse, as far as he was concerned, he possessed a pair of delicate, gossamer wings that would have been more fitting on a sprite or fairy than a lethal creature of the dark.

As if to add to his humiliation his powers were unpredictable under the best of circumstances, and his courage more often than not missing in action.

It was little wonder he had been voted out of the Gargoyle Guild and forced to fend for himself. They claimed he was an embarrassment to the entire community, and not one had stepped forward when he had been captured and made a slave by Evor.

Shay had taken the pathetic creature under her protection the moment she had been forced back to the auction house. Not only because she possessed a regrettable tendency to leap to the defense of anyone weaker than herself, but because she knew that it aggravated Evor to have his favorite whipping boy taken away.

The troll might hold the curse that bound her, but if he pressed her far enough she would be willing to kill him, even if it meant an end to her own life.

“Cherie, did the chair do something I did not see or were you just attempting to teach it a lesson?” Levet demanded, his voice low and laced with a lilting French accent.

Not at all the sort of thing to improve his status among the gargoyles.

Shay smiled wryly. “I was imagining it was Evor.”

“Strange, they do not greatly resemble one another.”

“I have a good imagination.”

“Ah.” He gave a ridiculous wiggle of his thick brow. “In that case I do not suppose you are imagining I’m Brad Pitt?”

Shay smiled wryly. “I’m good, but not that good, gargoyle.”

Her brief amusement faded. “No, the pity is that it was a table and not Evor smashed to pieces.”

“A delightful notion, but a mere dream.” The grey eyes slowly narrowed.

“Unless you intend to be stupid?”

Shay deliberately widened her eyes. “Who me?”

“Mon dieu,” the demon growled. “You intend to fight him.”

“I can’t fight him. Not as long as I remain held by the curse.”

“As if that has ever halted you.” Levet tossed aside the pillow to reveal his tail furiously twitching about his hoofs. A sure sign of distress. “You can’t kill him, but that never keeps you from trying to kick his fat troll ass.”

“It passes the time.”

“And leaves you screaming in agony for hours.” He abruptly shuddered.

“Cherie, I can’t bear seeing you like that. Not again. It’s insane to battle against fate.”

Shay grimaced. As part of the curse she was punished for any attempt to harm her master. The searing pain that gripped her body could leave her gasping on the ground or even passed out for hours. Lately, however, the punishment had become so brutal she feared that each time she pressed her luck it might be the last time.

She gave a tug on her braid. A gesture that revealed the frustration that smoldered just below the surface.

“You think I should just give in? Accept defeat?”

Embrace the Darkness is available in the following formats: