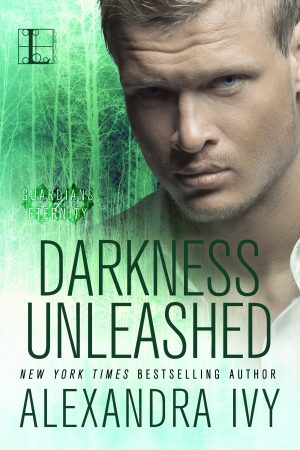 Book 5 in Guardians of Eternity

A scarred recluse, Jagr makes no secret of his disdain for others’ company. But now, as a member of Chicago’s powerful vampire clan, he has certain obligations to fulfill. The latest: track down a missing Were pureblood and return her to her sister. The problem: Regan Garrett has no intention of complying. And though Jagr agreed not to harm an inch of this stubborn female’s distractingly tempting body, he’ll gladly kiss her into submission, awakening an urge he hasn’t felt in years. Hell, in centuries…

Regan vowed never to be at the mercy of another man. That goes double for arrogant, steel-muscled vampires with eyes of ice. All Regan wants is revenge against those who imprisoned her. She doesn’t need an ally. She certainly doesn’t need a mate. But soon soon Regan will have to choose–between a lust for vengeance, and a passion as dark and dangerous as the night…

Seduction Has a Dark Side… 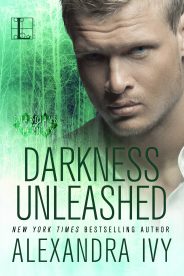 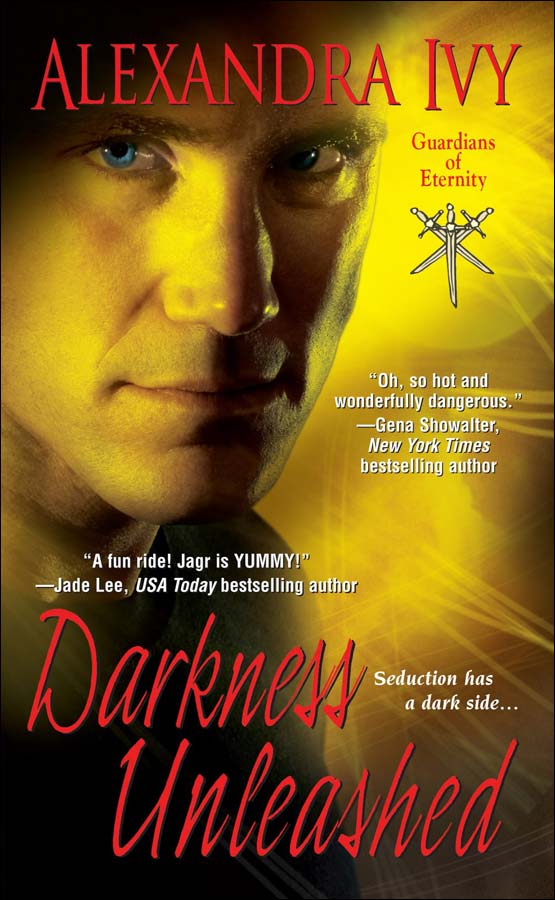 Jagr knew he was creating panic in Viper’s exclusive nightclub.  The elegant establishment with its crystal chandeliers and red velvet upholstery catered to the more civilized members of the demon world.  Jagr was anything but civilized.

He was a six-foot-three vampire who had once been a Visigoth chief.  But it wasn’t his pale gold hair that had been braided to fall nearly to his waist, or the ice-blue eyes that missed nothing that sent creatures with any claim to intelligence scurrying from his path.  It wasn’t even the leather duster that flared about his hard body.

No, it was the cold perfection of his stark features and the hint of feral fury that smoldered about him.

Three hundred years of relentless torture had stripped away any hint of civility.

Ignoring the assorted demons who tumbled over chairs and tables in an effort to avoid his long strides, Jagr concentrated on the two Ravens guarding the door to the back office.  The hushed air of sophistication was giving him a rash.

He was a vampire who preferred the solitude of his lair hidden beneath the streets of Chicago, surrounded by his vast library, secure in the knowledge that not a human, beast, or demon possessed the ability to enter.

Not that he was the total recluse that his vampire brothers assumed.

No matter how powerful or skilled or intelligent he might be, he understood that his survival depended on understanding the ever-changing technology of the modern world.  And beyond that was the necessity of being able to blend in with current society.

Even a recluse had to feed.

Tucked in the very back of his lair was a plasma TV with every channel known to humankind, and the sort of nondescript clothing that allowed him to cruise through the seedier neighborhoods without causing a riot.

The most lethal hunters knew how to camouflage when on the prowl.

He’d rather be staked than mince and prance around like a jackass.

Damn Styx.  The ancient vampire had known that only a royal command could force him to enter a crowded nightclub.  Jagr made no secret of his disdain for the companionship of others.

Which begged the question of why the Anasso would choose such a setting to meet.

In a mood foul enough to fill the vast club with an icy chill, Jagr ignored the two Ravens who stood on sentry duty near the back office, and, lifting his hand, allowed his power to blow the heavy oak door off its hinges.

The looming Ravens growled in warning, dropping their heavy capes, which hid the numerous swords, daggers, and guns attached to various parts of their bodies.

Jagr’s step never faltered.  Styx wouldn’t let his pet vampires hurt an invited guest.  At least not until he had what he needed from Jagr.

And even if Styx didn’t call off the guards…well hell, he’d been waiting centuries to be taken out in battle.  It was a warrior’s destiny.

There was a low murmur from inside the room and the two Ravens grudgingly allowed him to pass with nothing more painful than a heated glare.

Stepping over the shattered door, Jagr paused to cast a wary glance about the pale-blue and ivory room.  As expected, Styx (a towering Aztec who was the current king of vampires) was consuming more than his fair share of space behind a heavy walnut desk, his bronzed features unreadable.  Viper (clan chief of Chicago, who, with his silver hair and dark eyes looked more like an angel than lethal warrior) standing at his shoulder.

“Jagr.”  Styx leaned back in the leather chair, his fingers steepled beneath his chin.  “Thank you for coming so promptly.”

Jagr narrowed his frigid gaze.  “Did I have a choice?”

“Careful, Jagr,” Viper warned. “This is your Anasso.”

Jagr curled his lips, but he was wise enough to keep his angry words to himself.  Even presuming he could match Styx’s renowned power, he would be dead before ever leaving the club if he challenged the Anasso.

“What do you want?” he growled.

Darkness Unleashed is available in the following formats: