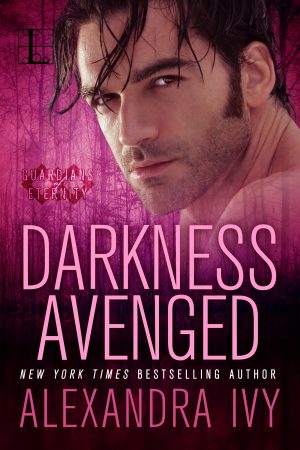 Book 10 in Guardians of Eternity

THE SEARCH FOR A TRAITOR

As the demon world celebrates the defeat of the Dark Lord, the vampire Santiago’s mood remains bleak. He still yearns for the sensual, raven-haired Nefri, who has inexplicably disappeared. But brooding for Nefri is a luxury that Santiago does not have. His traitorous sire, Gaius, is unleashing a violent scourge upon the mortal world, and Santiago must stop him before it’s too late…

LEADS TO A DANGEROUS SEDUCTION

To her dismay, the all-powerful Oracles have sent Nefri on her own mission to find Gaius, and failure is not an option. Nefri’s search leads her to the vampire’s abandoned lair—and straight into Santiago’s path. It’s clear Santiago intends to seduce her, but then an ancient, banished evil reappears, threatening to thrust the world into a madness it cannot survive… 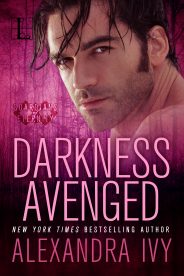 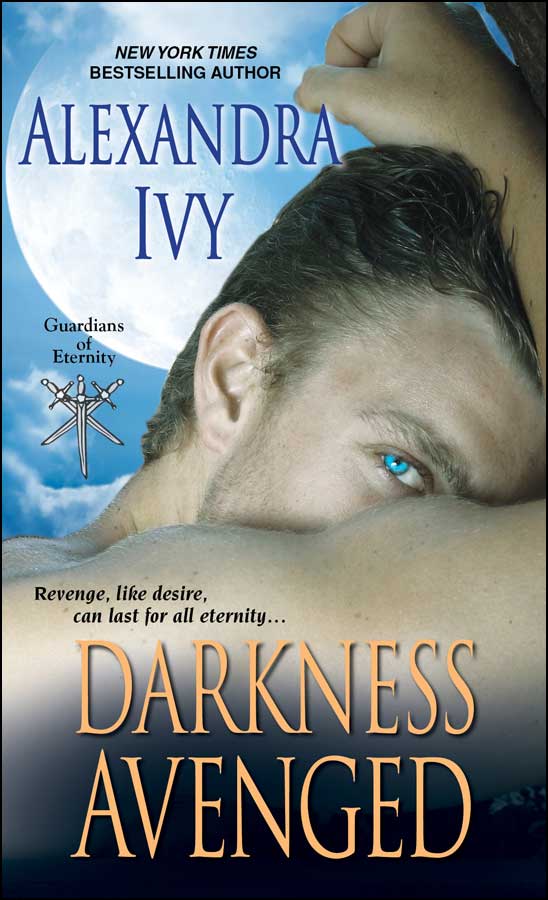 THE LEGEND OF THE VEIL

The myths surrounding the creation of the Veil were a dime a dozen, and worth even less.

Some said it was the work of angels who had become lost in the mists of time.

Others said that it was a rip in space made during the big bang.

The current favorite was that Nefri, an ancient vampire with a mystical medallion, created the Veil to provide a little slice of paradise for her clan, the Immortal Ones.  According to this particular rumor, it was whispered that on the other side there was no hunger, no bloodlust and no passion.  Only an endless peace.

It was a myth that Nefri, as well as the Oracles that sat on the Commission (rulers of the demon-world) were happy to encourage.

The truth of the Veil was far less romantic.

It was nothing more or less than a prison.

Viper’s Vampire Club, On the banks of the Mississippi River south of Chicago

The music throbbed with a heavy, death metal bass that would have toppled the nearby buildings if the demon club hadn’t been wrapped in spells of protection.  The imp magic not only made the large building appear like an abandoned warehouse to the local humans of the small Midwest town, but it captured any sound.

A damned good thing since the blasting music wasn’t the only noise that would freak out the mortal neighbors.

Granted, the first floor looked normal enough.  The vast lobby was decorated in a neoclassical style with floors made of polished wood, and walls painted a pale green with silver engravings.  Even the ceiling was covered with some fancy-assed painting of Apollo on his chariot dashing through the clouds.

Upstairs was the same.  The private apartments were elegantly appointed and designed with comfort in mind for those guests willing to pay the exorbitant fees for a few hours of privacy.

But once admitted past the heavy double doors that led to the lower levels all pretense of civilization came to an end.

Down in the darkness the demons were encouraged to come out and play with wild abandon.

And no one, absolutely no one, could play as rough and wild and downright nasty as demons.

Standing in the shadows, Santiago, a tall exquisitely handsome vampire with long, raven hair, dark eyes and distinctly Spanish features allowed his gaze to skim over his domain.

The circular room was the size of a large auditorium and made of black marble with a series of tiers that terraced downward.  On each tier were a number of steel tables and stools that were bolted to the marble.  Narrow staircases led to a pit built in the middle of the lowest floor and filled with sand.

The overhead chandeliers spilled small pools of light near the tables, while keeping enough darkness for those guests who preferred to remain concealed.

Not that there was a need for secrecy in the club.

The crowd was made up of vamps, Weres, and fairies, along with several trolls, an orc, and the rare Sylvermysts (the dark fey who’d recently revealed their presence in the world).  They came to fight in the pit for a chance at fleeting glory.  Or to indulge in the pleasures his various hosts and hostesses offered, whether it was feeding or sex.

None of them were known for their modesty.

Especially when they were in the mood to celebrate.

Santiago grimaced, his frigid power lashing through the air to send several young Weres scurrying across the crowded room.

He understood their jubilation.

It wasn’t everyday that an evil deity was destroyed, the hordes of hell turned away, and Armageddon adverted.

But after a month of enduring the endless happy, happy, joy, joy his own mood was tilting toward homicidal.

Well, perhaps it was more than just tilting he grimly conceded as a tableful of trolls broke into a violent brawl, knocking each other over the railing and onto the Weres seated below.

The domino effect was instantaneous.

With infuriated growls the Weres shifted, tearing into the trolls.  At the same time the nearby Sylvermysts leaped into the growing fight, the herb-scent of their blood swiftly filling the air.

Darkness Avenged is available in the following formats: