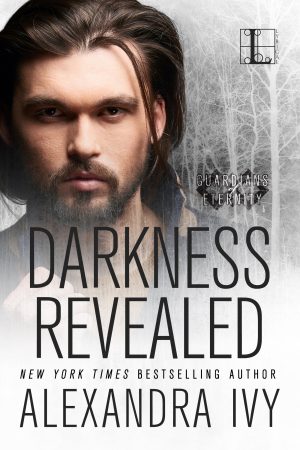 Book 4 in Guardians of Eternity

Two hundred years have passed since Anna Randal gave herself to Conde Cezar in a night of relentless passion.  Since then, Anna has become filled with unearthly power she can’t begin to comprehend.  And the sexy, charming vampire responsible has eluded all of her efforts to track him down, until now…

Cezar’s blissful encounter with Anna cost him two centuries of penance.  But one thing hasn’t changed…his body’s response to her is as urgent as ever.  Now, commanded by the Oracles to keep watch over Anna, Cezar finds himself torn between his need to protect her…and to possess her…

Someone wants Anna dead.  And as an ancient enemy prepares to wage a terrifying battle, Anna must decide whether to succumb to a dark. burning desire…and accept a destiny that could change the world forever… 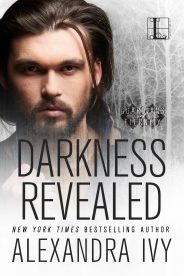 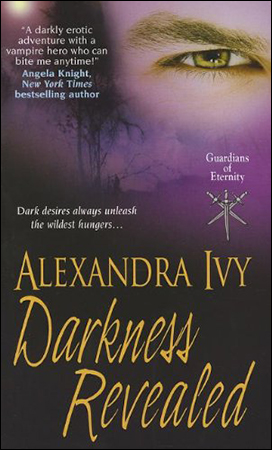 The ballroom was a startling blaze of color.  In the flickering candlelight the satin and silk draped maidens twirled in the arms of dashing gentlemen, the brilliant flare of their jewels making a rainbow of shimmering fireworks that was reflected in the mirrors that were set in the walls.

The elegant pageantry was near breathtaking, but it was not the passing spectacle that caught and held the attention of the numerous guests.

With the amused arrogance that belonged solely to the aristocracy, he moved through the crowd, needing only a lift of his slender hand to have them parting like the Red Sea to clear him a path, or a glance from his smoldering black eyes to send the ladies (and a few gentlemen) into a fluttering, frenzy of excitement.

Much to her annoyance, Miss Anna Randal did her own share of fluttering as she caught sight of that faintly golden, exquisitely chiseled profile.  Stupid really when gentlemen such as the Conde would never lower themselves to take notice of a poor, insignificant maiden who spent her evenings in one dark corner or another.

Such gentlemen did, however, take notice of beautiful, enticing young maidens who would boldly encourage the most hardened reprobate.

Which was the only reason that Anna forced herself to follow in the wake of his lean, elegant form as he left the ballroom and made his way up the sweeping staircase.  Being a poor relation meant that she was forced to take on whatever unpleasant task happened to crop up, and on this evening, her unpleasant task included keeping a close eye upon her cousin Morgana who was clearly fascinated by gentlemen such as the dangerous Conde Cezar.

A fascination that might very well end in scandal for the entire family.

Hurrying to keep the slender male form in sight, Anna impatiently hiked up the cheap muslin of her gown.  As she had expected he turned at the top of the stairs and made his way down the corridor that led to the private chambers.  Such a rake would never attend something so tedious as a ball without having a nefarious assassination arranged beforehand.

All she need do was ensure that Morgana was not the beneficiary of that nefarious part and Anna could return to her dark corner in the ballroom and watch the other maidens enjoy their evening.

Grimacing at the thought, Anna paused as her quarry slipped through a door and disappeared.

Damnation.  Now what?  She had seen nothing of Morgana, but there was no assurance that she was not already hidden in the room awaiting the Conde’s arrival.

Cursing her vain, self-centered cousin who considered nothing beyond her own pleasures, Anna moved forward and carefully pushed open the heavy door.  She would just take a quick peek and then…

A scream was wrenched from her throat as slender fingers grasped her wrist in a cold, brutal grip, jerking her into the dark room and slamming the door behind her.

The reception room of the hotel on Michigan Avenue was a blaze of color.  In the light of the chandelier Chicago’s movers and shakers strutted about like peacocks, occasionally glancing toward the massive fountain in the center of the room where a handful of Hollywood B stars were posing for photographs with the guests for an obscene fee that supposedly went to some charity or another.

The similarity to another evening was not lost on Anna as she once again hovered in a dark corner watching Conde Cezar move arrogantly through a room.

Of course, that other evening had been near two hundred years ago.  And while she hadn’t physically aged a day, (which she couldn’t deny saved a butt-load on plastic surgery and gym memberships) she wasn’t that shy, spineless maiden who had to beg for a few crumbs from her aunt’s table.  That girl had died the night Conde Cezar had taken her hand and hauled her into a dark bedchamber.

And good riddance to her.

Her life might be all kinds of weird, but Anna had discovered she could take care of herself.  In fact, she did a damn fine job of it.  She would never go back to that timid girl in shabby muslin gowns (not to mention the corset-from-hell).

That didn’t, however, mean she forgotten that fateful night.

He had some explaining to do.  Explaining on an epic scale.

Which was the only reason she had traveled to Chicago from her current home in Los Angeles.

Absently sipping the champagne that had been forced into her hand by one of the bare-chested waiters, Anna studied the man who had haunted her dreams.

When she had read in the paper that the Conde would be traveling from Spain to attend this charity event she had known that there was always the possibility the man would be a relative of the Conde she had known in London.  The aristocracy was obsessed with sticking their off-spring with their own name.  As if it weren’t enough they had to share DNA.

One glance was enough to guarantee it was no relative.

Mother-nature was too fickle to make such an exact duplicate of those lean, golden features, the dark, smoldering eyes, the too-die-for body…

As black as sin it fell in a smooth river to his shoulders.  Tonight he had pulled back the top layer in a gold clasp, leaving the bottom to brush the expensive fabric of his tux.

If there wasn’t a woman in the room who wasn’t imagining running her fingers through that glossy mane, then Anna would eat her silver-beaded bag.  Conde Cezar only had to step into a room for the estrogen to charge into hyper-drive.

A fact that was earning him more than a few I-wish-looks-could-kill glares from the Hollywood pretty boys by the fountains.

Anna muttered a curse beneath her breath.  She was allowing herself to be distracted.

Okay, the man looked like some conquering conquistador.  And those dark eyes held a sultry heat that could melt at a hundred paces.  But she had already paid the price for being blinded by the luscious dark beauty.

Darkness Revealed is available in the following formats: