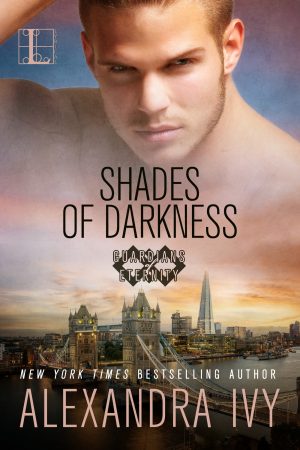 Book 16 in Guardians of Eternity

The Guardians of Eternity think they’ve averted the disaster that could destroy them. But in New York Times bestselling author Alexandra Ivy’s world of temptation, lust, and secrets, one slip could change everything…

Chaaya endured centuries as a sacrifice, protecting her people from an evil that could destabilize all magic. At long last, her servitude is over—and she’s raring to have some fun. The baddest ghost-girl in Las Vegas has a talent for causing mayhem. And for getting under the skin of her solid, silent bodyguard, the vampire Basq . . .

Basq doesn’t let anyone close. He’s learned the costs of companionship. But reckless, disrespectful Chaaya, with her fiery temper and her fierce loneliness, isn’t like anyone else. Staying near her isn’t just a duty, it’s a hunger. When a prisoner of Chaaya’s last battle escapes, possibly seeking Chaaya’s nemesis, Basq isn’t letting her chase through a hellscape mirror London alone. But when the choice is between abandoning everything that’s kept them alive, or each other, survival will take not only desire—but trust . . . 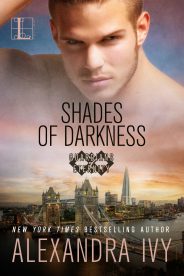 Troy, Prince of Imps, stifled a yawn as he strolled through the marble corridor of the merfolk castle. It was a stunningly beautiful place that stretched for endless miles beneath the ocean. The walls were decorated with exquisite murals and massive chandeliers hung from the vaulted ceilings. There were carved statues lining the wide corridors and delicate furnishings that were covered in fabrics that shimmered in pale shades of blue and green.

Even better, the beautiful merfolk drifted through the spiderweb of rooms in gossamer gowns that left little to the imagination.

So why was he bored?

Troy halted in front of a section of wall that was a clear panel to reveal the dark waters outside the castle that were populated with dazzling reefs and fish that glowed with an effervescent light. Tilting his head to the side, he admired his reflection.

He truly was a glorious sight with his with brilliant hair flowing down his back like a river of fire. His face was long and pale with vivid green eyes that held the sort of sensual power to bring most creatures to their knees. Precisely where he liked them. He was also tall and slender, with bulging muscles that he made sure to emphasize with the one-piece spandex outfit in a vibrant shade of pink he was currently wearing.

He was an exotic butterfly among a field of lilies.

Troy stifled another yawn. He was accustomed to the bright lights of big cities and the naughty delights of his various strip joints. In contrast, the merfolk were tedious, peace-loving fey who had tragically become even more boring after Chaaya was sent to live in Vegas with Chiron and his new mate, Lilah. The young female who’d been sacrificed to protect the world centuries ago, and then recently rescued from the dark dimension, had provided plenty of entertainment. Her name should have been chaos, not Chaaya.

Troy shook his head. Why did he linger in this place?

He answered his own inner question as he turned to walk toward the massive double doors at the end of the corridor.

Inga, Queen of the Merfolk.

That’s why he stayed.

It wasn’t that he was in love with the female who was a mongrel mix of ogress and mermaid, although he took epic delight in tweaking Levet’s miniature snout by pretending a romantic interest. But he was utterly committed to ensuring that Inga succeeded in her new role as the leader of the merfolk.

She was one of the few demons who possessed a genuinely pure soul. Even after she’d been abused by slavers, and manipulated by Riven, the former merfolk king, and then shoved into a position she never expected and didn’t want.

Every day she woke up determined to do the best for her people, even those who hated her for being a mongrel.

Who didn’t root for an underdog?

Plus, Troy had to admit there was a glorious satisfaction in being a King Maker. Or in this case, a Queen Maker.

He was the power behind the throne.

Lost in his thoughts, Troy was distracted by the sound of voices echoing through the air.

“You are not going to bother the queen with this, Riza,” a male voice chided in surprisingly loud tones. As if he was aggravated at repeating the same words over and over.

“She needs to know, Jord,” a second male stubbornly retorted.

There was the click of boots on marble, then the two males stepped out of a narrow hallway that led down to the lower chambers.

They were both tall and willowy like all mermen with long, pale hair that was tinted with blue. And they were both wearing the strange armor that looked like overlapping scales and short tridents belted at their sides. To the untrained eye they looked like toy soldiers, but Troy knew that shimmering armor was stronger than steel and the tridents could shoot out silver threads that wrapped around their opponent to trap them in an inescapable net.

“Do you intend to make a personal report to the queen each time the prisoner sneezes?” the taller of the two demanded, his too-pretty features set in an expression of arrogant disdain. “Or if she refused to eat her dessert?”

Riza scowled. His face was rounder with a hint of petulance in the youthful features. “There’s something weird about that female talking to herself all the time.”

Jord snorted. “Prisoners do weird things. They sing. They yell. They see pink elephants. It has something to do with being locked in the dungeons.”

“If the two of you wish to squabble like children you should loiter outside the nursery, not the royal chambers,” Troy chided.

The two men came to an abrupt halt, as if they’d been so intent on their argument, they hadn’t noticed a six-foot imp in pink spandex standing in the middle of the corridor.

Jord sent him an impatient frown. Troy’s sardonic refusal to concede that the merfolk were superior to other fey creatures meant he wasn’t a favorite among the natives. That was fine. He wasn’t there to win friends. His only concern was Inga and whether or not she was being treated with the respect and loyalty she deserved.

Riza stepped forward. “I need to speak with Queen Inga.”

“Of course she’s busy, she’s the queen,” Troy drawled, covertly studying the younger male. He was obviously upset. Maybe Inga should find out what was going on before Troy ran them off. “But I am certain she can make time for one of her loyal subjects.”

Jord made a sound of impatience. “I assure you it’s not necessary.”

Troy arched a brow. Why was the male so determined to keep the younger guard away from the queen? Was he the usual arrogant ass who enjoyed bullying anyone who happened to be his underling? Or did he have another reason for trying to silence the younger male?

Only one way to find out.

Troy moved to rap his knuckles against a gilded door, waiting for Inga to call out for them to enter before pushing it open. He stepped over the threshold and entered the room that matched the rest of the castle with lots of marble and fluted columns and sparkling chandeliers. The major difference was the large dais that held the velvet and gold throne.

A throne that was currently empty.

Troy rolled his eyes, already knowing what he was about to discover as he strolled up the crimson runner that led the way to the dais. Sure enough there was the sound of grunting as Inga struggled to her feet and then she abruptly appeared from behind the throne.

She didn’t look like the Queen of the Merfolk. There was none of her mother’s ephemeral beauty, instead she’d inherited her ogre father’s sturdy body that stood well over six foot, with shoulders broad enough to make a football player proud. Beneath her drunkenly tilted crown, her reddish hair grew in tufts and her features were carved with a blunt lack of finesse. Her blue eyes were the only hint that she had mermaid blood in her veins, but they flashed an ogre-red when she was annoyed. Which was more often than not.

At the moment she was wearing a hideous muumuu dress that was an insult to fashion. The billowing gown was a strange shade of olive with big yellow and orange flowers splattered over it. She was also speckled with paint.

A delicate shudder raced through Troy. He’d finally convinced this female to spend at least a few hours in the throne room each day, listening to the concerns of her people, but whenever she had a moment alone, she lost herself in her love for painting. It was a harmless hobby, he acknowledged, and she was exquisitely talented. The murals on the walls of the throne room were now the finest in all the castle. Still, she looked like she’d been sucked through a whirlpool, rolled in a multi-color mud pit, and tossed out the other side.

Thankfully, she had the massive trident clutched in her hand. The Tryshu was a magical artifact that chose the leader of the merfolk. As long as Inga was holding it, there was no question that she was the queen.

Stopping next to the dais, Troy offered an elaborate bow. “Your majesty,” he said in deep, formal tones.

Belatedly realizing that Troy wasn’t alone, Inga grudgingly straightened her crown and forced a smile that revealed her pointed teeth.

“Are you here to see me?” she demanded.

Shades of Darkness is available in the following formats: