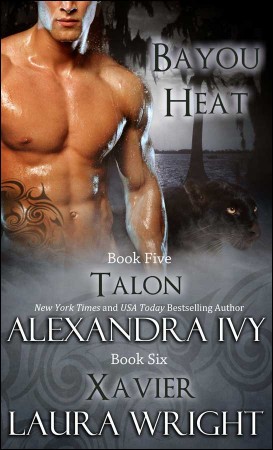 TALON
After the tragic death of his parents when Talon was young, he’s dedicated his life to protecting the Pantera. To the strikingly gorgeous man, loyalty and honor mean everything. So it’s no surprise that he’s determined to treat Isi Rousseau as the enemy. If the elders believe she is a danger then he will do whatever necessary to prevent her from destroying his beloved Wildlands.

But discovering the delicate beauty sleeping in his bed, Talon discovers his noble intentions wavering. The female, with short, jet black hair streaked with blue, and a pair of dark eyes, might act tough, but it’s obvious to him that she’s as desperate as he is for a place to call home. More importantly, her presence is helping keep Ashe and her baby alive. Suddenly things are not quite as black and white as Talon assumed, and he must decide if his loyalty to his people is worth losing his true mate.

The drop-dead gorgeous leader of the Geeks, Xavier has one goal: find the human male his enemies seek. Devoted to his work, and to the Pantera, there is nothing that can distract him from accomplishing his goal. Until he spots his best friend’s little sister alone and partying it up with a bunch of human males at the local bar. Consumed with possessiveness, Xavier takes her home and refuses to leave her side until her brother returns. He tries to convince himself he’s just looking out for her, but the longer he’s around Amalie, the harder it is to deny the molten attraction that burns between them.

She has three days to change his mind…

Beautiful and strong-willed Hunter, Amalie is free. No brother to tell her what to do, and no Pantera watching over her because she happens to be the last Pantera born. But before she can truly enjoy herself, her brother’s best friend tries to put her on lockdown. Xavier has been the star in all of Mal’s fantasies, and there’s no one she’d rather give her virginity to. But the sexy male refuses to open his eyes and see what’s right in front of him. Mal knows she has three days to change his mind. Three days to make him see her as grown, and the one female he can’t resist. 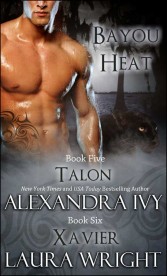 The house hidden in the tangled undergrowth just south of Bossier City was one stiff breeze away from total collapse.

Built from logs that had warped in the humid Louisiana weather, the cabin had a thin sheet of rusted tin and the windows were framed by rotting shutters.  Even worse, the front porch had sagged at one end, giving it the appearance of a cheap funhouse.

Not the first place any man would select for his wife to give birth to his twin daughters.

But what choice did Chayton have?

With a muttered curse, he paced through the thick grass that left a damp film of dew on his knee-high moccasins.  With the blood of the Chitimacha tribe flowing through his veins, Chayton felt most comfortable in soft leather pants and a vest that had been beaded by his mother.  His glossy, dark hair was worn in a braid that fell to his waist, and his lean face was dominated by a prominent nose and eyes so dark they looked black.  His bow was loosely held in one hand, with a quiver of arrows strapped to his back.

He was always on guard.

Ever since the vision had forced him to go on the run with his pregnant wife.

A familiar fear speared through his heart at the memory of that fateful day.

He’d been in the Wildlands at the request of the elders.  He was one of the very few humans ever allowed in the remote sanctuary of the mystical Pantera.  At first it had been his position as a shaman that had allowed him entry.  Like his father before him, he’d had the ability to touch the spirit world.

It was a gift that gave him a much longer life span than most humans and the strange talent to detect the faction of an unborn Pantera baby.  They called him when a female was close to delivering her cub to foresee whether it would be a Diplomat or Hunter or Healer.  The Pantera began training their young from the cradle.  Or at least they’d called him until the Pantera stopped having cubs.

That should have been the end of his connection to the Wildlands, but during one of his visits he’d stumbled across a talent that had only been a distant rumor among shamans until he’d manifested the gift.

He could do more than a catch a hint of the future of a Pantera.

He was an actual seer.

His predictions were often vague and sometimes impossible to interpret, but they were accurate enough that he was summoned to the Wildlands when the elders were debating a decision that would affect their people.  Surrounded by the magic of the Wildlands, he would call upon the powers of his ancestors to be blessed with a glimpse of the future that could help lead the Pantera in the right direction.

It was a power he used only when the need was great.

Opening pathways to the ancestors was not only dangerous to him, but could occasionally allow malevolent spirits to escape into the world of men.

A damned shame he hadn’t said no when the elders had called for him again six months ago.  But then he’d never seen a vision that was so clear.  And certainly never one so intimately connected to himself.

His dark thoughts were thankfully cut short as the midwife stepped onto the porch.  A small, dried up prune of a woman, she was known by the locals as JuJu.

“It’s done,” she said in clipped tones, wiping her hands on a bloody apron wrapped around her thin body.

She had the bedside manner of a rattlesnake.

“Both are healthy.”  The woman stuck out a hand gnarled by age.  “You have my money?”

Chayton reached beneath his vest to pull out the precious money that he’d earned by selling the pelts of animals he hunted.  He didn’t dare take a job that would force him to fill out paperwork.

Paperwork could be traced.

He held up the money.  “Your word that you won’t speak of this birth,” he growled, his eyes hard with warning.  “Not to anyone.”

A cunning expression touched her dark, leathered face.  “It will cost you.”

“Fine.”  Chayton added another fifty he couldn’t afford.  “Your word.”

“You have it.”  JuJu snatched the money and poked it into the pocket of her apron.  “Do you want to see your children?”

Chayton took a step forward only to come to a horrified halt when he heard a female voice speak from the nearby trees.

“We all wish to see the children.”

In one fluid motion he had an arrow in his bow and pointed toward the strange mist that flowed forward.

“Stay back,” he snarled, his gut twisting with dread as the mist lightened to reveal three females who moved forward with grim intent.

Talon/Xavier is available in the following formats: