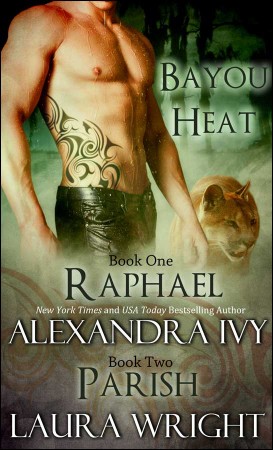 In the depths of the bayous lives a secret race of puma shifters. The creation of a powerful magic, they have lived in peace until the threat of extinction drives them to seek the world beyond their homelands. Now the Pantera must discover the answer to their dying magic and halt an ancient enemy before it can destroy them all.

RAPHAEL
The brilliant and dangerous diplomat of the Pantera shapeshifters, Raphael has devoted his life to discovering the key to the infertility that is threatening the extinction of his puma race. Creating a vast network of spies worldwide, he never expected to discover that the answer might be beneath his very nose. But when Ashe, a beautiful human female, crosses his path, his most primitive instincts are stirred. Unable to resist, he takes her to his bed, and is shocked when she becomes pregnant with his child. It’s a miracle that might prove to be the salvation of his people, but only if he can keep her safe from the mercenaries determined to kill her.

PARISH
Untamed and undeniably sexy, Parish, leader of the Pantera hunters, rarely leaves the magic of the Wildlands to deal with the humans he despises. But with the prized and risky Pantera birth on the way, puma shifter, Parish must travel to New Orleans to find and bring back a human doctor. The moment he sees the lovely, talented and all too human Dr. Julia Cabot he cannot resist the wild, potent drive to make her his. Betrayed and destroyed by love, Julia will not let her heart choose her path again. But as she and Parish fight to save the life of an unborn child, a fierce and overwhelming bond develops between them, threatening her frozen heart with the secret hope and ultimate temptation of love and family. 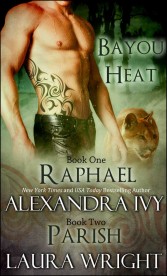 Legend of the Pantera

To most people the Pantera, a mystical race of puma shifters who live in the depths of the Louisiana swamps, have become little more than a legend.

It was rumored that in the ancient past twin sisters, born of magic, had created a sacred land and claimed it as their own.  From that land came creatures who were neither human or animal, but a mixture of the two.

They became faster and stronger than normal humans.  Their senses were hyper-acute.  And when surrounded by the magic of the Wildlands they were capable of shifting into pumas.

It was also whispered that they possessed other gifts.  Telepathy, witchcraft, immortality and the ability to produce a musk that could enthrall mere mortals.

Mothers warned young girls never to roam alone near the swamps, convinced that they would be snatched by the Pantera, while young men were trained to avoid hunting anywhere near the protected Wildlands.

Not that the warnings were always successful.

What girl didn’t dream of being seduced by a gorgeous, mysterious stranger?  And what young man didn’t want to try his skill against the most lethal predators?

Most believed the species had become extinct.

The words were still ringing in Ashe Pascal’s ears as the door to the trailer slammed behind her.

She grimaced as she gathered her clothes that littered the front porch and headed for her piece-of-shit clunker that was parked near the curb.

For once the drunken insults flung by her mother managed to hit a nerve.

Not that she was a whore.  It wasn’t like she’d gotten paid for spreading her legs, was it?

Hell no, she’d spread them for free.

Or at least she assumed she had.

How else could she be pregnant?  Immaculate conceptions might happen in the good book, but in the bayous of southern Louisiana women got knocked-up the good old-fashioned way.

A damned shame she couldn’t remember what happened.

If she had to pay the piper she should at least have enjoyed the dance.

With a shake of her head, she yanked open the door of her car and tossed her clothes on the cracked leather seat before climbing behind the driver’s wheel.

Shoving her key into the ignition, she breathed out a sigh of relief as the engine rattled to weary life.  The way her pissy luck was running she’d expected the battery to be dead.  Again.

She supposed there was an irony in the fact that she’d promised herself that she would start looking for a new car just as soon as she’d paid off her mother’s latest bar tab.  She’d even driven to the bar to tell the owner that she was done being her mother’s personal banker.

And that’s when the trouble had started.

Barely aware that she’d shoved her car in gear, Ashe absently drove through the small town that hovered on the edge of the bayou, pulling to a halt across the street from the only bar in town.

The two story wooden building with a tin roof had at one time been painted a cheery yellow, but over the years it’d faded to a miserable mustard, with heavy green shutters that could offer protection during hurricane season.  The entire structure was built on heavy stilts to keep the main floor off the ground.  A necessary precaution in this area.  The danger of flooding was a hundred percent, which no doubt explained why less than a few hundred people lived in the town.

She gave a humorless laugh at the neon sign that blinked in the thickening gloom.

It sounded like a hang-out for the local football team, or maybe a taxidermist’s shop.

Instead it was filled with a motley crew who she assumed came in from the oil fields, the shrimp boats and the dark shadows of the swamps.  And of course, locals like her mother who were so desperate for a drink they were willing to ignore the thick air of aggression that filled the entire building.

The rest of the town avoided the place like the plague.

Including the pack of stray dogs that terrorized the rest of the town.

The Cougar’s Den was a cesspit of danger.

Her grim thoughts were abruptly interrupted as the humid spring breeze swept through her open window, tugging at her long, black curls and caressing her skin that remained a pale ivory no matter how much sun she got.  Her eyes, as dark as a midnight sky, narrowed.

There was something in the breeze.

Something beyond the hint of azaleas, and newly bloomed roses from Old Lady La Vaux’s garden, and even the more distant smell of rotting vegetation that wafted from the swamps.

What the hell was that scent?

Yes.  That’s what it was.  A rich, intoxicating male musk.

Raphael/Parish is available in the following formats: