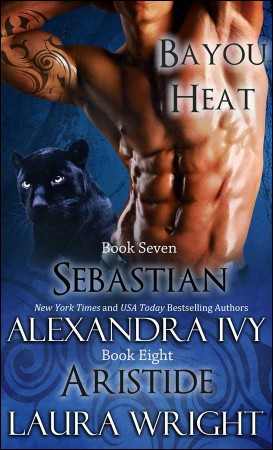 A DIPLOMAT WITH THE HEART OF A SAVAGE
Sebastian Duval has devoted his life to ensuring the survival of his people. He’ll do whatever is necessary to protect the Wildlands, even if it means working with the human FBI to prove the Pantera aren’t responsible for the sudden rash of puma attacks. But his honorable intentions have met their match when his liaison turns out to be a beautiful, mysterious woman who stirs his most primitive instincts.

A WOMAN WITHOUT A PAST
Reny Smith refuses to allow her amnesia to ruin her life. She’s created a new identity and is determined to become a successful FBI agent. Unfortunately, that means working with a Pantera diplomat to solve the latest assaults in New Orleans. Sebastian is not only a risk to the secrets she’s worked so hard to conceal, but also to her career. She’ll have to choose whether to run from the man who threatens to strip away her defenses, or listen to her heart and become the woman she was always meant to be.

HE MUST MATE A PANTERA FEMALE
Gorgeous Nurturer Aristide, is a rare male. He wants to be mated, wants love and a family. But only a Pantera female will do. The problem is, the one female Ari can’t resist is human, and when she’s captured by the Pantera and called their greatest enemy, Aristide must decide between the abiding want of his puma heart and the vow he’s made to his shifter species.

A HUMAN WOMAN WITH A DANGEROUS SECRET
Reporter Katherine Burke lives for one thing. Her five-year-old son, Noah. She will do anything to protect him, including writing heinous lies about a group of puma shifters she doesn’t even believe exist. But when she’s captured by the Pantera, sees the amazing truth of who they are, and gains the love of an honorable male, she knows she must choose between more lies or trusting someone for the first time in her life. 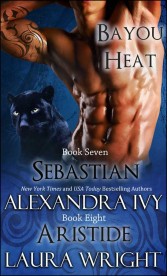 The small cabin with a thatched roof wasn’t a traditional prison.  There were no bars.  No locks.  No uniformed guards.

Instead, it was hidden on an isolated island in the Wildlands, surrounded by thick, untamed foliage and a treacherous bog that could kill the unwary.  Just outside the door, several large Pantera in cat form stood on constant guard.  But it was the magic of the elders which ensured that no one was going in or out of the small structure.

It was a place that only a handful of Pantera even realized existed.  They didn’t need to know, because it was where those Pantera who lost control of their cats and became feral were taken to be put to death.

Not precisely a tourist attraction.

Today, however, it housed a far more dangerous predator than a crazed panther.

And the Wildlands would never be the same.

Inside the cabin, Shakpi sat on the narrow cot that was the only furnishing in the room.

She didn’t care about the stifling heat, or the bugs that crawled over the dirt floor.

In fact, she rejoiced in them.

After what felt like an eternity of being trapped beneath the Wildlands, she had broken out of the prison her sister, Opela, had created by sacrificing her own life.  Now she savored the sensation of freedom.

Oh, she hadn’t entirely escaped.  Opela’s magic had effectively bound her to this land…the bitch.  But over the past century, Shakpi had slowly and patiently weakened the edges of the prison.  Once she could touch the world, she began calling her human slaves, using them to spread her infection that started the slow destruction of the Wildlands.  As her power grew she could begin to manipulate the Pantera themselves, using them as pawns in their own annihilation.

Still, she remained stuck, her incorporeal form trapped by her sister’s spell.

It wasn’t until the Shaman had started to use his skills to contact his ancestors that she realized she could tap into his connection to the dead.  Carefully she began infusing a small part of herself into the human male.  The spell that had held her captive was meant to recognize the power of a goddess, not a human.  She was slowly camouflaging herself in the guise of the Shaman.

It’d taken years.  But Shakpi had learned to be patient.  Even when the Shaman had seemingly disappeared just when she was prepared to complete her transformation.  She knew he would return.

Her destiny was to rule the world.

It was written in the stars.

And her faith had been rewarded.  Just a few hours ago the man had reappeared in the Wildlands, arrogantly opening himself to her possession.  Fool.

Unfortunately, she hadn’t quite anticipated the downside of being sheathed in a human form.

Not until she’d been so rudely attacked by the Pantera.

It was only then that she realized that while she was immortal, her new body was vulnerable to damage.  Which was the only reason she was currently trapped in the cabin instead of destroying the bastards who’d dared to try and kill her.

Thankfully she was able to use her powers to hold off the initial rush of Pantera, managing to kill at least a half dozen before they’d driven her into this tiny cell and retreated.

No doubt they were even now debating how to kill a goddess without losing more of their warriors, but Shakpi wasn’t particularly worried.  At least not about escaping from the cabin.  She had telepathically linked with one of her disciples who was swiftly approaching to release her.

Sebastian/Aristide is available in the following formats: