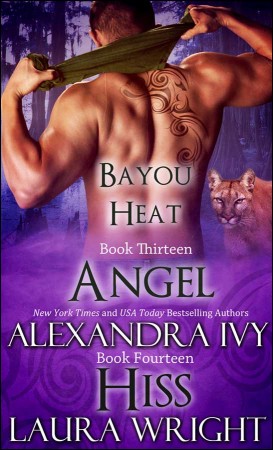 ANGEL
Dr. Angel Savary is dedicated to his skills as a Healer. After the death of his mother, he’s determined never to fail another Pantera. But when he’s kidnapped by a human female, he discovers that her brutal past offers the answers he’s been seeking. Even more astonishing, she stirs his cat with a ruthless need to claim her. Suddenly, he realizes there’s more to life than duty.

Indy’s life has been one of grim survival. The last thing she wants is the distraction of a lover. Until she captures Angel. The Pantera is stunningly gorgeous and sexy as hell. Unfortunately, she hasn’t captured him to fulfill her fantasies. As much as she might ache with the need to give in to their mutual passion, he’s the only hope she has of saving the child she’s rescued from a ruthless enemy who threatens to destroy them all.

HISS
Caged like the beast he is, Hiss—former Hunter and traitor to the Pantera—has accepted his fate as a tortured prisoner in the hideous experimentation lab known as the Sub. In fact, he wishes death would come more quickly. Until he connects with the female in the cage beside him, that is. As he helps his fellow captive through her pain and her nightmares, she forces him to envision the possibility of forgiveness after the hell he’s wrought on his kind. But when their captors plan to use her in their brutal breeding program, Hiss has no choice but to attempt a risky escape.

Stunning and fierce, Gia used to be a water Hunter in her shifter sect before she was abducted and tossed in the lab for blood drains, and worse. Threatened with a hopeless future as a lab brood mare, escape seems like her only possibility for survival. After refusing to give herself to the breeding program, she escapes with Hiss to his Wildlands. Giving Hiss her heart and her loyalty in the face of the Pantera’s overwhelming guilt, all she expects in return is his honesty. But when she wakes up one morning to find him gone, will she too deem him a traitor to their love? 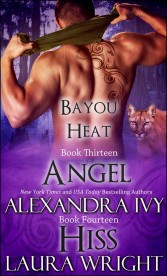 An electric buzz raced through the New Orleans hospital. The sort of buzz that could only mean one thing…

With muffled giggles, the female staff scrambled to catch sight of the tall man, whose lean body was currently emphasized by a light cashmere sweater and black jeans. Not that the women gave a shit what he was wearing. All of them, even the elderly charge nurse, fantasized about tearing off his clothes to expose the chiseled muscles they could see rippling with every fluid movement.

And if his lickable body wasn’t enough, he was also flat-out gorgeous. His hair was white-gold and clipped short while his eyes were as dark as polished ebony. A startling contrast that never failed to capture attention.

And his features…they were stunningly beautiful.

There was no doubt he was all male. Raw, dangerous, lethally sexy male.

But his features were finely chiseled and gorgeous enough to melt a woman’s heart, not to mention her panties.

Today, there was an extra buzz in the air as another man strolled down the corridor at Angel’s side. No one recognized the six-foot-plus male with golden hair and gold-green eyes, but he made more than one female sigh with pleasure.

Ignoring the avid gazes that followed him as he strolled down the hallway, Angel led his companion into his office and firmly shut the door.

Instantly he grimaced. The large room that was elegantly furnished with a heavy walnut desk and matching bookshelves had always seemed comfortable enough. Especially since he spent only a few days a month at the hospital, preferring to remain in the Wildlands as much as possible. Now he realized the space hadn’t been designed to accommodate two alpha puma shifters.

Leaning against the edge of his desk, Angel leashed his cat’s aggressive reaction to the prickles of heat that filled the air. Not easy when Raphael, the leader of the Suits, was prowling from one end of the office to the other.

“Have you found anything?” the older male demanded.

Angel’s lips twitched. Raphael was a skilled Diplomat, but the past few months had taken their toll on all of them.

A crazed goddess. The near extinction of their species. A traitor. And now a new enemy was creeping out of the shadows, threatening to be equally dangerous to the Pantera.

Angel/Hiss is available in the following formats: