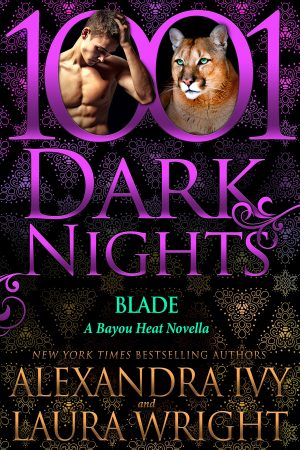 Sexy Suit Blade was held captive and abused for decades. Benson Enterprises was desperate to use his superior blood to create super soldiers. But when he’s finally rescued, he can’t return to the Wildlands with the other prisoners. Not without the female he was forced to watch being impregnated. The female who has gone missing.

Beautiful and broken, Valli just wants to run away and never look back. But with the shocking news of her pregnancy fresh in her mind, she wonders if that’s even possible. Told by her captors that one of the caged animals assaulted her, she knows she must do everything in her power to keep her unborn child safe. But when a glorious male tracks her down and claims her and her baby as his own, will she have the strength to walk away? 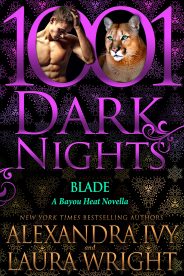 It was the prickle on the back of his neck that warned Blade he was being followed.

Slowing his steps, he forced himself to casually stroll through the streets of Bonne, Louisiana.  He pretended an interest in the glass storefronts that lined the town square, even as he nodded toward the occasional pedestrian who studied him with blatant curiosity.  He was guessing the small town thirty miles south of Baton Rouge didn’t get many visitors.

Of course, it was just as likely the men were staring because he was six foot four, with the hard muscles of a trained athlete that flexed and rippled beneath his faded jeans and ivory thermal shirt.  While the women were more interested in his male beauty.  His pale gold hair was trimmed close to his head that provided a shocking contrast to the midnight darkness of his eyes.  His features were finely chiseled with a slender nose, high cheekbones, and wide lips that had once smiled with a charming ease.

Now they were pressed together with a grim determination.

Turning onto a side street, he thankfully found it all but deserted.  The town had clearly never been a bustling metropolis, but over the years it’d faded to sleepy village.  Which meant he could deal with his stalker without unwanted attention.

Maintaining his leisurely saunter, he passed by an abandoned gas station that was next to an empty lot.  The breeze tugged at his short hair, chilling his skin.

Louisiana had two seasons.  Hot and humid.  Or cool and humid.

Today it was cool and humid.

Blade is available in the following formats: