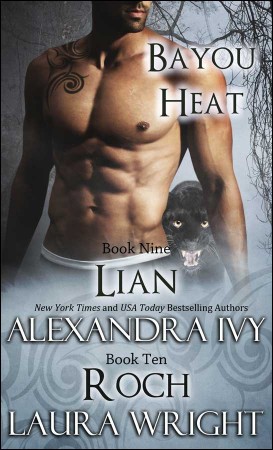 Lian isn’t a happy puma. He’s a lethal Hunter who should be out fighting the enemy, not babysitting a human scholar. Still, he’ll do whatever necessary to rid the world of the evil goddess, Shakpi. And there’s the bonus of spending a few hours away from his family of Nurturers who have been smothering him with love. The last thing he expects is to discover a female who not only stirs his passions, but who calls to his cat on a primal level.

Dr. Sage Parker has always known she’s different. Not only because she’s a genius with languages, but because she has a weird ability to see auras around people. It’s no wonder that she prefers to remain secluded in her small cottage. Then Lian charges into her life, dragging her out of the safety of her home and forcing her to travel to the Wildlands. Even more dangerously, he touches a place in her heart that she shut off long ago. Now, to claim the future she never dreamed possible, she must translate the ancient Pantera scrolls before Shakpi destroys the male she loves.

Roch is devoted to his work. The sexy, blond male wants nothing more than to keep his life just as it is. But when he falls ill, he’s forced to find help in the human world. Who would’ve guessed that the cure he needs is a human woman carrying the next Pantera child? Attorney Lydia Page has not only been fired from her job for being pregnant, but the clinic where she was inseminated wants her to end the pregnancy because she’s carrying an ‘animal.’ Shocked and scared, Lydia has nowhere to turn. She loves her unborn child, and soon realizes that the only way to keep herself and her baby safe is to accept the help of a mysterious and very handsome puma shifter. But could the stranger be more than just her rescuer? 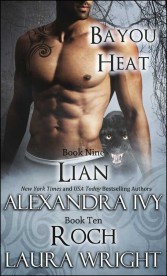 The streets of the small town of La Pierre, Louisiana were empty and the handful of houses locked up tight.

It could be because it was well past midnight with the faintest hint of an autumn chill in the air.

Or maybe it was the fact that the town was perched on the edge of the bayous where anything might crawl out and attack the unwary.  Including a race of puma shifters known as Pantera who the humans had just learned weren’t creatures of myth and legend.

Yeah, that might make the locals a little twitchy.

There was, however, one business in town that was still open to customers no matter how late or dangerous it might be.

The Cougar’s Den was the local bar that doubled as a meeting place for the Pantera.

The two-story wooden building was built on tall stilts with a tin roof that was faded to a miserable shade of mustard.  There were also shutters painted a dull green that could offer protection during hurricane season, and a rickety staircase that had nearly been the death of more than one human trying to make their way home after a long night of drinking.

Inside there was the mandatory bar with tall stools, a cramped dance floor and a couple of shabby pool tables at the back of the long, darkly paneled barroom.

There was even an old-fashioned jukebox that was currently blaring out Lynyrd Skynyrd to the dozen Pantera males lined up at the bar or playing pool.

Perched on one of the stools, Lian sipped his chilled water, looking every inch a badass Hunter.

It wasn’t just the fact he was well over six foot, with broad shoulders and muscles that looked like they’d been carved from granite.  Or the dark hair that had been pulled into a long braid that hung to his waist.  Or even the jeans and faded Iron Maiden shirt.

It was the restless hunger in the whiskey-gold eyes and the barely leashed violence that buzzed in the air around him.

Of course, the Suit seated next to him didn’t look much more civilized.

Michel might be a Diplomat, but there was no mistaking the fact that a lethal predator prowled behind those cunning green eyes.  Oh, and if that wasn’t scary enough, there was also the skull-shaved head, and broad body that was currently covered by a casual cotton shirt that was tucked into his black slacks.

At the moment, he was tossing back his favorite shot of whiskey as Lian filled him in on the latest happenings in the Wildlands.

Raphael, the leader of the Suits, had been careful not to share too much information when he sent out word to call his Diplomatic staff home.  They’d discovered the hard way that not everyone could be trusted.  Not even among the Pantera.

“Hiss is a traitor?” the Suit breathed in horror.  “Fuck me.”

Lian nodded.  There were a lot of ‘fuck mes’ going around the Wildlands over the past few days.

Not only because Hiss had been actively working with their enemies, but because the Pantera had been attacked by the disciples of Shakpi who’d been determined to sacrifice Ashe’s baby.

Oh, and the fact that they had the evil goddess—who was currently unconscious and trapped in a human body—locked in a secluded cabin in the middle of the Wildlands.

Lian/Roch is available in the following formats: