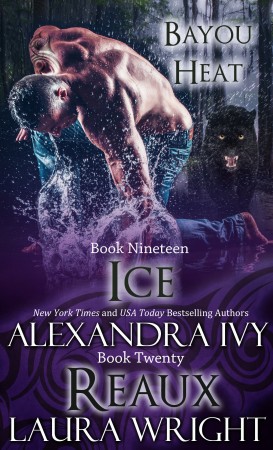 Cammy, a beautiful, talented Hunter, has always taken her future for granted. She would mate with her best friend Rage and live happily ever after. But her perfect future explodes, quite literally. Rage has chosen another mate, and their enemies have struck at the very heart of the Wildands. Now she is forced to work with Ice, the aloof, always mysterious Hunter, to retrieve one of their own. Together they must track down the humans who attacked them, and uncover a secret that threatens the survival of the Pantera.

Can she find a way to work with the gorgeous male who stirs her most primitive emotions? And, more importantly, is a happily ever after still possible in her future? 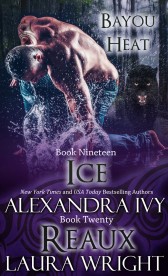 Despite the chilly January weather, the Wildlands was thriving.

The home of the puma shifters, known as Pantera, was hidden deep in the swamps of Louisiana. Less than a year ago, the magical land had been tainted by a crazed goddess, nearly driving the Pantera to the edge of extinction. But now the lush vegetation had returned, as well as the Dyesse lily that was found only in the Wildlands and was filled with the magic of the land.

And even more astonishing, the Pantera were thriving. After fifty years of infertility, they now had nurseries that held a few precious cubs, with more on the way.

But not everything was perfect.

After secluding themselves from the world for decades, they’d discovered that an immoral, ruthless human had been kidnapping and using the Pantera in his hidden laboratories.

They’d managed to rescue several of their people who were tortured for years, as well as the human “lab rats” who were given large doses of Pantera blood and DNA. They’d also succeeded in destroying several of the facilities owned by Benson Enterprises.

But their enemies were not about to concede defeat.

Not without a fight…

Cammy Taylor hurried toward the sweeping colonial building with a wide, columned terrace and upper balcony. Painted white with black shutters, and topped by a steep roof, it had a distinct “Gone With The Wind” vibe.

Until the past few months it’d served as the headquarters for two of the Pantera factions. The Geeks, who were in charge of dealing with all technology. And the Diplomats, or Suits, as they were affectionately known. Now, however, the Hunters had started to use the building as well. It made it easier to coordinate the protection of the Wildlands as well as develop a strategy for tracking down their enemies.

Only the Nurturers still maintained their offices in the nearby clinic.

Entering the large reception area, Cammy headed directly toward the conference room at the back. She was only distantly aware of the numerous males who halted in their tracks to watch her walk by. She was accustomed to the fascination with her long raven black hair that contrasted with the pure ivory of her skin, as well as her deep violet eyes that were rimmed with long black lashes. Her features were delicately carved and her body lush with feminine curves.

But it wasn’t just her beauty that attracted attention.

It was the liquid grace of her movements, which marked her as a lethal Hunter, that seemed to stir the male Pantera’s fantasies. As if the combination of soft femininity and predatory power was some sort of aphrodisiac.

Entering the room that held a long table in the center of the wood planked floor, and a bank of windows that overlooked the misty bayou, Cammy paused near the door. There were already a dozen Pantera seated at the table, filling the room with an electric tension, but her gaze instinctively sought out the male who was seated next to his mate.

Rage had been her best friend since they were both training to become Hunters. He was gorgeous, charming, and utterly loyal. And despite the fact that he’d bounced from one bed to another, she’d somehow convinced herself they would eventually settle down together.

Stupid, of course. Their cats had never been more than friends and casual lovers. Certainly her animal hadn’t scented him as her mate. But her human side had weaved dreams of a future together. Dreams that had been destroyed the second she’d caught sight of him with the tiny female Geek when he’d returned to the Wildlands.

The two of them practically glowed with their love for one another.

Cammy clenched her teeth as pain lashed through her. Okay. She’d been an idiot. But that didn’t make it easier to witness Rage totally besotted with his mate.

Feeling a watchful gaze, Cammy abruptly turned her head to catch sight of the Hunter standing in the corner. Ice Richelieu. A strange sensation tingled through her body as her gaze lingered on the stark beauty of his chiseled features and the shimmer of gold in the hair that brushed his broad, broad shoulders.

He was a fellow Hunter, but there was nothing about him that reminded her of Rage. He was older, for one thing. And for another, he’d moved around the world with his parents who were Diplomats. His foreign travels allowed him to be trained by a dozen different experts in various fighting styles.

Oh, and there was the indubitable fact that there was nothing charming about him. He was stoic, grim-faced, and inclined to hold himself aloof from his fellow Pantera.

Most unnerving of all, there was a savage hint of disdain in his icy blue eyes whenever he glanced in her direction. As if he found her unbearably obnoxious.

Pressing her lips together, she deliberately turned her back on the Hunter, her inner cat huffing in annoyance. Other females might ooh and ahh over his large, muscular body that looked as hard as granite beneath his black T-shirts and faded jeans. Or shiver at the hint of feral sensuality that promised all sorts of wicked pleasure.

But not Cammy. Truthfully, she did her best to avoid him.

Taking a seat at the end of the table, she thankfully turned her attention toward the two males who strolled into the room.

Raphael was the leader of the Suits. He was tall and lean, with a golden beauty that was emphasized by his elegant suit. In contrast, Parish, the head of the Hunters, was dressed in jeans and sweatshirt. He had long black hair, broad shoulders and his handsome face was marred with scars that bisected his cheek from his right ear down to his mouth. The two couldn’t look more different, but they both possessed the thunderous power of alpha cats.

Instantly everyone in the room sat and stood a little straighter.

“Is everyone here?” Raphael demanded.

It was Rage’s new mate who answered.

“Xavier wasn’t able to come. He’s still trying to decrypt the files from the computer we brought back from Bossier City,” Lucie explained. Xavier was the leader of the Geeks and lately rarely left his offices upstairs, even to sleep. He was convinced there was vital intel in the data that could help them track down their enemies. “He said to send him an email.”

Ice/Reaux is available in the following formats: