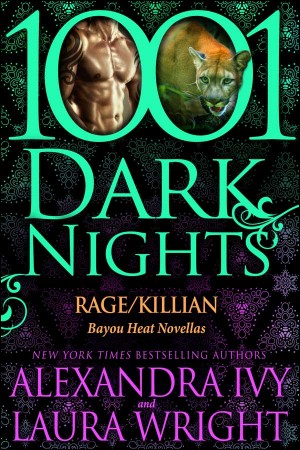 Get Wild in the Wildlands

RAGE
Rage might be an aggressive Hunter by nature, but the gorgeous male has never had a problem charming the females. All except Lucie Gaudet. Of course, the lovely Geek is a born troublemaker, and it was no surprise to Rage when she was kicked out of the Wildlands.

But now the Pantera need a first-class hacker to stop the potential destruction of their people. And it’s up to Rage to convince Lucie to help. Can the two forget the past—and their sizzling attraction—to save the Pantera?

KILLIAN
Gorgeous, brutal, aggressive, and human, Killian O’Roarke wants only two things: to get rid of the Pantera DNA he’s been infected with, and get back to the field. But the decorated Army Ranger never bargained on meeting the woman—the female—of his dreams on his mission to the Wildlands.

Rosalie lost her mate to a human, and now the Hunter despises them all. In fact, she thinks they’re good for only one thing: barbeque. But this one she’s guarding is testing her beliefs. He is proud and kind, and also knows the pain of loss. But in a time of war between their species, isn’t any chance of love destined for destruction? 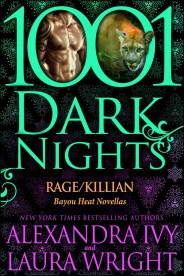 LEGEND OF THE PANTERA
To most people the Pantera, a mystical race of puma shifters who live in the depths of the Louisiana swamps, have become little more than a legend.

It was rumored that in the ancient past twin sisters, born of magic, had created a sacred land and claimed it as their own. From that land was born creatures who were neither human or animal, but a mixture of the two.

They became faster and stronger than normal humans. Their senses were hyper acute. And when surrounded by the magic of the Wildlands in the bayous of southern Louisiana they were capable of shifting into pumas.

Most believed the entire species had become extinct.

Then months ago, they’d been forced to come out of the shadows when it was uncovered that a secret sect of humans have been experimenting with Pantera blood and DNA.

It’s a battle for the future of the puma-shifters.

One they dare not lose.

No matter what the cost.

The Wildlands were exactly what most people would expect for a pack of puma-shifters. Thick foliage, towering cypress trees, narrow water channels clogged with water lilies and banks of sweet-smelling azalea.

A glorious, untamed bayou that stretched for miles.

But it was much more than a vast swamp. Behind the magical barriers were hundreds of comfortable homes, a state of the art medical clinic, a village green where the Pantera shared meals, and a large, Colonial-style structure with black shutters that looked like it’d been plucked out of Gone With the Wind.

The building was currently being shared by the heads of the various factions. Suits, who were the diplomats of the Pantera. The Geeks who took care of everything high-tech. The Healers who could usually be found at the clinic. And the Hunters, who were the protectors.

Inside, the HQ was buzzing with activity. No big surprise. Over the past few months they’d endured a crazy-ass goddess, a traitor, and now a human corporation, Benson Enterprises, who’d been secretly kidnapping Pantera and using them as lab-rats.

Which was why Rage should have suspected that something was up when Parish led him to a back room that offered them a temporary privacy.

The two male Hunters looked similar at a glance. Both had deeply bronzed skin and dark hair, although Rage kept his cut short. And both had broad shoulders and sculpted muscles that were covered by worn jeans and T-shirts despite the chill in the air.

But while the older Parish looked like a lethal killer with scars that bisected the side of his angular face, Rage was blessed with the features of an angel. Even more fascinating, his eyes were a stunning violet that was flecked with gold.

Women had been sighing in pleasure since Rage had hit puberty.

It took a closer look to see the predatory cat that lurked just below the surface.

At the moment, he looked every inch the deadly Hunter. His eyes glowed with power and if he’d been in his cat form his tail would have been twitching as he paced from one end of the room to the other.

“I’m sorry.” Parish folded his arms over his chest, the air prickling with the force of his authority. The older male wasn’t the leader of the Hunters because of his sparkling personality. “Did you think that was a request? Because it wasn’t.”

Rage grimaced, deliberately leashing his instinctive aggression. He’d discovered at an early age he could use his natural charm to…encourage people to see things his way. It was only when his cat was provoked to violence that it was obvious why his faction was Hunter instead of Diplomat.

“Please, Parish,” he soothed. “Send someone else.”

“There is no one else.” Parish narrowed his golden eyes. “In case you missed the memo we’ve been having a few disasters lately.”

“Exactly. I should be out searching for the mysterious Christopher,” Rage said, referring to the head of Benson Enterprises, the shadowy corporation that was responsible for stealing Pantera as well as vulnerable humans. “Or at least hunting down the Frankenstein labs. We still can’t be sure we’ve burned them all.” He pointed toward the window that overlooked the manicured grass of the communal area. Below them a few Pantera mothers were sharing a late lunch while their cubs tumbled across the spongy ground. It was winter in the Wildlands, but the Pantera embraced the brisk air. “Hell, I’ll even spy on the military. Someone needs to discover who can and can’t be trusted in the human government.”

Parish looked far from impressed by his logic. “Are you trying to tell me how to do my job?”

Rage hesitated. This was the first time he’d ever questioned a direct order, but there was no way in hell he wanted to deal with Lucie Gaudet.

The female Geek had been a few years younger than Rage, and growing up he’d initially felt sorry for the half-feral creature who’d lived in the outer parts of the swamp. She’d slunk around the edges of town with her hair matted and tangled, and her face covered in dirt. Almost like a fabled wood sprite who flitted among the trees, spreading mist and magic

But as they’d matured, his pity had changed to annoyance.

Instead of growing out of her odd preference for the shadows, she’d continued to lurk at a distance, and worse, she’d used her cunning intelligence to torment others. Including himself.

“I’m a Hunter, not a Geek,” he finally muttered. “Why doesn’t Xavier send one of his own people to track down the female?”

Parish’s lips twisted. “Because, like you, they’re terrified of Lucie.”

Rage scowled. “I’m not scared of her.”

The two predators glared at one another, before Rage at last heaved a resigned sigh.

“Being misunderstood is shaving your head and drinking so much elderberry wine you puke purple for three days,” he muttered, ignoring Parish’s snort of amusement.   Okay, it was possible that Rage had done both of those things. “Lucie burnt down her grandfather’s cottage.”

Parish shrugged. “No one was inside it.”

“She stole my diary so she could decrypt my private thoughts and posted them in the community center.” Something that still aggravated the hell out of Rage. He’d written highly sensitive information about the various females he’d been dating at the time. All of them had refused to talk to him for weeks.

“You shouldn’t have been such a hound dog,” Parish said with blatant lack of sympathy.

Parish rolled his eyes. “A lot of women.”

“Not as many as most people think,” Rage retorted. It was true he spent a large majority of his time with females, but it wasn’t about sex. Or at least, not everything was about sex. More than a few of his dates had been nothing more than two friends enjoying an evening together. “But I’m not ashamed of my appreciation for the opposite sex,” he continued. “I love their scent. Their feel. Just having them near.”

“Then why were you so upset?”

He didn’t share the sense of mortification he’d never forgotten. Instead, he folded his arms over his chest.

Rage/Killian is available in the following formats: