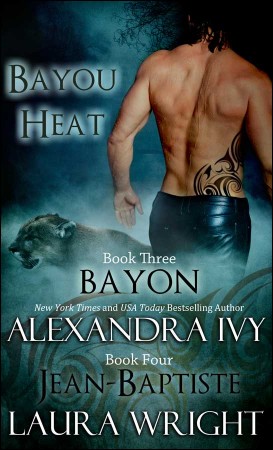 The fight continues in the Wildlands. Facing extinction, the Pantera have been given a miracle. A child. The first one in over fifty years. But even as they prepare to celebrate, the enemy strikes, putting at risk the fragile female who carries the hope of their people.

BAYON
Charming, drop-dead gorgeous Hunter Bayon is thirsting for revenge on the enemies who slipped into the Wildlands and attacked Ashe and her vulnerable child. Pledging to track down the cowards, Bayon goes on the hunt, pursuing the humans to a nearby town. But searching their shabby hideaway, he makes a discovery that shocks him to his very soul and might very well destroy the heart of the Pantera.

JEAN-BAPTISTE
Tattooed and pierced, sexy Nurturer Jean-Baptiste has been living in utter isolation. His cat is out of control, and the only thing that soothes the beast is a rare mineral he keeps inking into his skin. Until he meets her: Genevieve Burel. The beautiful and buttoned-up female puma is unlike anyone he’s ever met. She makes his cat purr, and he knows he must possess her, mate with her. But the secret she’s keeping might threaten not only their unbridled passion for one another, but the very future of the Pantera race. 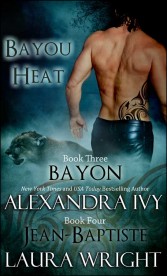 Deep beneath the bayou, Shakpi stirred in the darkness of her prison.  For centuries she’d been trapped beneath the choking layers of magic.  Her sister, Opela’s, last gift to her beloved Pantera.

Ancient fury surged through her, sending out shockwaves that shook the land above her.  It was all the fault of those damned cats.

In the beginning, it was just her and Opela.  Twin sisters born of magic, meant to rule the world.  They had done everything together, never needing anyone else.

Then Opela became obsessed with her desire for children.  She’d claimed that there was no point of existence if she couldn’t possess creatures to love.   Without thought for anyone but herself, Opela created a new race, the Pantera, to call her children.

Shakpi had done everything in her power to stop her sister.  They’d had each other.  Why did they need anyone else?  But Opela had refused to listen to her pleas, instead lavishing her love and devotion on her Pantera.

Consumed with envy, Shakpi had plotted to kill the freaks of nature.  Mortal creatures weren’t meant to be blessed with Opela’s magic.  Or given the ability to shift into puma form.  They were an abomination that had to be destroyed.

She’d been confident that her sister would understand her desire to return to the life they’d had before.  A time when they’d both been happy.  Together.

Born to destroy, Shakpi was unable to create her own children to act as instruments of her revenge.  Instead she infected humans with her malevolent toxin, giving them the power to spread it among the bayou, destroying the magic that gave the Pantera their power.

How could she possibly have suspected her sister would make the ultimate sacrifice?  That Opela would use her life-force to entrap Shakpi in this tomb to save her children?

But the bitch had underestimated Shakpi.

After centuries of being locked in stasis, her tentacles were at last reaching beyond her prison, touching the weak, the desperate, and the greedy.

The Wildlands deep in the bayous of Louisiana would never be considered a place of peace.

The magical land of the Pantera was filled with puma shape shifters who had all the aggression of their animal nature plus the usual volatile emotions of their human nature.  It was a combination that encouraged plenty of passion and conflict.  Which meant that more than a little blood had been shed over the centuries.

But never before had there been enemies capable of slipping past the Wildlands’ borders to directly attack the Pantera.

The shockwaves were still rippling through the gathered Pantera as Bayon raced to the edge of their territory.  He couldn’t help Raphael, who remained with his pregnant mate, Ashe.   He had no talent for healing or for combating the mystic evil that was trying to destroy the babe she carried.

Bayon was a Hunter.  A tall, golden haired man with eyes that fluctuated from leaf green to deep gold when he was aroused, and the solid muscles of a warrior.  His talent was tracking down the bastards who dared to come into his homeland, and destroying them.

Well, first he intended to torture them.  Slowly.  Painfully.  He needed to know who they were and if they were actually disciples of Shakpi, the Pantera’s ancient enemy.

First, however, he had to complete his current mission for Raphael.

He slowed his blinding speed as he neared the private house that was practically hidden among the weeping willows.

Most Pantera preferred to live in the main community with their various factions.  There were the Diplomats who dealt with all things political, including their network of spies, as well as the Geeks who performed their magic with computers.  There were the Nurturers who had built one of the world’s finest medical facilities as they searched for the reason the Pantera had lost the ability to procreate.  There were the elders who were the ultimate rulers of the magical race of puma shifters, and their spiritual leaders.

And then there were the Hunters.

The warriors who protected their people with a ruthless efficiency.

There were, however, a few Pantera who sought isolation.

Parish, the leader of the Hunters, had lived in the caves at the far side of the Wildlands after his sister had been killed by humans. Everyone had understood his need to mourn in private.

Bayon didn’t know what had driven Jean-Baptiste, one of their finest Healers, to shut himself off from his family and live so far from everyone else, and he had no intention of asking.  Pantera might live as a tight-knit community, but that only meant they had to have firm boundaries when it came to privacy.  Shoving your nose in someone’s business was a good way to get it snapped off.

Vaulting onto the wraparound porch of Jean-Baptiste’s cabin, Bayon slammed his fist against the heavy wooden door, frowning when no one answered.

Dammit.  He knew Jean-Baptiste was inside.

So why the hell was he ignoring him?

“Jean-Baptiste,” he growled, his voice edged with impatience.  He didn’t have time for this shit.  “I know you’re in there.  Open the fucking door.”

A string of ugly curses reverberated through the cabin before the door was yanked open to reveal a six foot plus, male Pantera with dark brown hair that hit below his jawline, and eyes a peculiar shade of amber.  He was dressed like Bayon in faded jeans and shit-kickers with a white T-shirt pulled over his leanly muscled torso.   But unlike Bayon, he was wearing a heavy leather jacket that covered the numerous tats that Bayon had only glimpsed from a distance.   Oh, and he had the sort of piercings that made him look like he should be in a motorcycle gang, not walking the halls of a hospital.

“What the hell?” Jean-Baptiste snarled.

The amber eyes narrowed.  “Why?”

It was obvious the news hadn’t yet reached the Healer.  “Where?”

Jean-Baptiste jerked in shock at Bayon’s blunt explanation, the air prickling with his angry disbelief.

Jean-Baptiste was right.  It should have been impossible.

Which only pissed off Bayon more.

Bayon/Jean-Baptiste is available in the following formats: