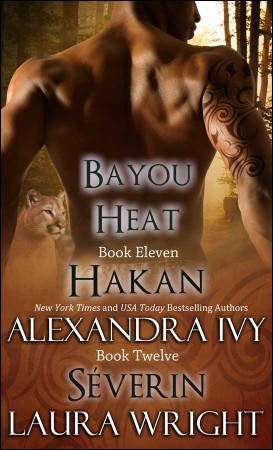 HAKAN
Hakan never apologizes for being a lethal, barely civilized Hunter, but he understands that he has to be careful when it comes to his future mate, Payton. The pretty young Geek captured his heart long ago, but he was forced to keep her at a distance until she was mature enough to handle his feral nature. When he discovers she’s been captured, however, he’s done waiting. It’s time to claim his female. Unfortunately, he didn’t anticipate that Payton might refuse the mating.

Payton understands that there’s nothing more important than discovering why their newest enemies are targeting the Pantera. And if that means putting herself in danger, then that’s exactly what she’s going to do, no matter what the arrogant Hakan might say. Of course, that’s easier said than done. Especially when Hakan is clearly determined to seduce her. Does she listen to her pride, or give in to the urgings of her fragile heart?

SÉVERIN
Humans have always been the enemy.

Séverin has lived the last ten years of his life in his puma form. He is feral, predatory and angry at the human world. Born in captivity, the male is haunted by years of torture and abuse. And when he comes upon a human female running scared through his Wildlands domain, he wants nothing more than to get her back to the border. But as she finds shelter with him in his rustic treehouse, the male inside him starts to emerge, threatening his still-caged heart.

Until he meets her.

Running from her abusive ex, Taylor is desperate for a place to hide. She believes her only chance at life is the magical Wildlands. But with a war brewing, the Pantera species aren’t too keen on letting a stranger into their fold. Luckily, there is one Pantera who might want the beautiful teacher to stay. A male who, like Taylor, is running scared. Can they both listen to their hearts and allow the first real love of their lives in? 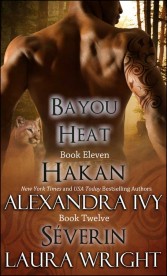 He realized that most Pantera considered him crazy.  Why wouldn’t they?  No one could possibly understand his obsessive refusal to believe that his family had been killed when he was just a babe.

But now they considered him more than just insane.

He was a danger.

The knowledge burned at him like acid on his soul.

This wasn’t what he wanted.  He’d never intended to betray his people, or to work with his enemies.  But what choice had the elders left him?

Pacing the private room at the back of the medical clinic that kept him separated from the rest of the building, Hiss came to an abrupt halt as he caught a familiar scent.

Ah.  Speak of the devil.

Or devils, as the case may be.

A fierce smile curved his lips as he moved to stand directly in front of the door.

He’d waited for this moment for the past sixty years.

Ever since he’d been old enough to realize that the endless dreams he had of a pretty, dark-haired female clutching a child in her arms were more than just nightmares.

Even now he could remember the wild fear that had combusted through him as he’d rushed to the elders, convinced that he was having visions of his mother and sister.  He’d been desperate to begin an immediate search for his family, but the elders had refused to send out the Hunters to track them down.  Hell, they wouldn’t even let him go in search of them.

Instead, they’d locked him in a small cell so he couldn’t leave the Wildlands, claiming his parents and sister had died during a trip to New Orleans and his refusal to believe they were dead proved he was belatedly grieving their loss.

He’d been waiting for some sort of leverage to force the ancient females to tell him the truth of his missing family.  And now, at last, he had it.

Outside the door he could hear the muted voices of the elders as they shared a private conversation.  His hands clenched, his claws slicing out to draw blood as they carved through his palm.

No doubt they were discussing how they were going to try to force information out of him without offering any in return.

Even if he was going to be executed as a traitor, he intended to have the truth before he died.

Intent on trying to overhear the conversation from the outer hallway, Hiss didn’t notice the sound of a window being opened behind him.

It wasn’t until he caught the distinct scent of expensive cologne that he whirled around to discover a tall, human male standing a few feet behind him.

Hiss instinctively widened his stance, his fangs elongating as he prepared for an attack.

“Who the hell are you?” he growled.

The man smiled, his dark hair smoothed from his lean face and his blue eyes oddly compelling.

“A friend,” he assured Hiss in a posh English accent.

Hiss curled his upper lip, flicking a disdainful glance over the slender form that was attired in a smoke gray suit that probably cost over a grand.

“I don’t have human friends,” he informed the intruder, his eyes narrowed.

Hakan/Séverin is available in the following formats: