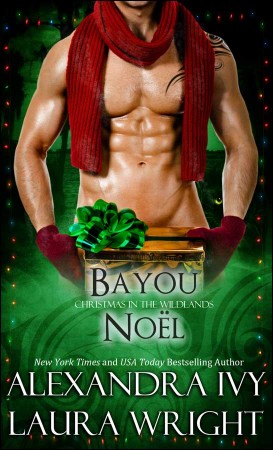 ‘Tis the season for new beginnings
Molly is through with spending Bayou Noel alone – after waiting five years for Garrick to notice her as more than just his mother’s caregiver. The aggravating male might always have a place in her heart, but she’s determined to find someone who wants to build a family with her. She has no idea that writing a letter of resignation will bring Garrick back to the Wildlands.

It will take a miracle to bring them together
Garrick can’t believe that Molly is willing to walk away. She’s not only become irreplaceable to his mother, but he’s become addicted to her letters when he was far away from home. He’ll be damned if he is going to let her slip away. But once back in the Wildlands, Garrick is forced to choose between opening his heart to the female he loves or risk losing her forever. 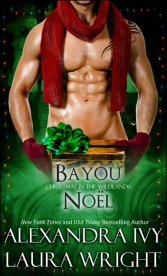 Night had just fallen when Garrick Loriot strode into his opulent Parisian apartment with a scowl on his lean, starkly handsome face. After months of delicate negotiations, he’d at last reached a tentative deal to purchase an apartment building in Montmartre to use as a safe house for Pantera Diplomats, only to have the negotiations fall apart when it was declared a historical landmark.

Seriously. Was there anything in this city that wasn’t a fucking historical landmark?

His pissy mood, however, swiftly disappeared when he flipped on the light and caught sight of the envelope that had been slipped beneath his door.

It was from her. He could just catch the scent of vanilla mixed with earthy cypress. His heart did that familiar leap as he bent to grab it off the priceless Parisian carpet.

He always looked forward to hearing from Molly. Especially this time of year. With his father deceased, these letters were his one and only connection to the Wildlands and the mother who had never fully recovered from a near-fatal accident.

Like both his parents, Garrick was a born Diplomat which meant he never knew where he would be from one week to another. He depended on those letters to keep him connected to his home.

Unlike those of the previous Nurturers who’d cared for his mother, Molly’s letters weren’t dry reports of medical facts. Hers felt like family, and were filled with wit and humor, and captured his mother’s spirit, making him feel as if he were there.

And after his shitty day, he could use a pick-me-up.

Tearing open the envelope, he dropped into a chair near the window, his six-foot-plus frame dressed in one of the Armani suits Molly always called his “stick up his ass armor.” And by the white glow of the Noël lights strewn on buildings, lampposts and even the Eiffel Tower in the distance, he read:

I am writing to inform you of my resignation as caretaker to your mother, Virginia Loriot, effective December 24.

This was not an easy decision for me to make. These past five years have been very rewarding, but it’s time for me to move on. I have accepted a position at Medical, and will be starting straight away.

Thank you for the opportunity to work with your mother. I wish her nothing but the best. You’ll be pleased to know I’ve found a suitable replacement. Virginia has met and approved her.

Bayou Noel is available in the following formats: