Long before I wrote my sexy paranormal romances, I wrote traditional Regency romances as Debbie Raleigh. Now I’m thrilled that one of my favorites is available once more, as fresh and delightfully surprising as ever…

Molly Conwell’s life has been quite unremarkable—until she learns the startling details of her late employer Lady Woodhart’s will: The sum of 30,000 pounds will be divided equally between the deceased’s grandson, Viscount “Hart” Woodhart, and Molly if they wed. If one or the other fails to appear, then the present party receives the entire fortune. Molly has no intention to wed Hart, but if she inherits the money she could help her brother regain his proper place in Society. Besides, she’s convinced that her prospective groom, who has always accused her of being a fortune hunter, will not present himself. As Molly embarks on a daring charade, she discovers a fierce opponent in Hart —and an even fiercer desire for this dangerously handsome man who may prove impossible to resist…

I’m newly captivated by this tale of unexpected love, and believe you will be too. 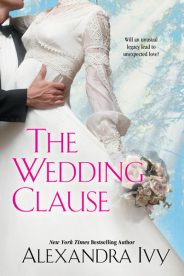 “What the devil! Is this some damnable jest?”

The slender, rather pale solicitor gave a nervous twitch as the angry nobleman stormed toward his desk, a wad of papers clutched in his hand.

The poor gentleman had reason to be twitchy. Anthony Elkington, Viscount Woodhart, known to his friends simply as Hart, was an intimidating force under the best of circumstances. Not only tall, he possessed the hard, relentless strength of a well-honed soldier. He had also been blessed, or perhaps cursed, with the beauty of Lucifer himself. A wide brow, thick ebony hair, features that had been chiseled by a master’s hand and stunning midnight black eyes that smoldered with a relentless power all added to his aura of invincibility. Women coveted him, even when they shivered at the hint of danger that cloaked his large form.

Gentlemen flatly refused to cross his will. At least a wise gentleman did so. Unfortunately, Mr. Grady was in no position to be wise. Swallowing heavily, he clutched the arms of his chair as he valiantly struggled to overcome his natural instinct to bolt toward safety.

“You expect me to believe that this ridiculous will is legal? Clearly my grandmother was out of her wits,” Hart growled.

“I . . . yes, I mean no. That is, the will is perfectly legal, my lord, and I assure you that Lady Woodhart was in sound wits when it was drafted.”

“Impossible. No one in their sound wits would think that I would ever wed Miss Conwell. Not if she were the last maiden in all of England.”

“I believe your grandmother was very fond of Miss Conwell.”

“Indeed.” The black eyes abruptly hardened with a lethal glare. “She was also fond of that damnable parrot, Mr. Meeks. Am I expected to wed him as well?”

“I . . . no, certainly not.” The words came out as a squeak. “Perhaps if you would have your own solicitor review the will, he could assure you that it is all perfectly legal and straightforward.”

“No, I do not bloody wish to contact my solicitor.” Hart struggled to maintain his composure.

No easy task when his hands itched to wring the scrawny neck of Mr. Grady. Damn it all. It was difficult enough to have lost the grandmother he adored. A woman who had raised him after his parents had died when he was just sixteen and had been an indomitable source of strength in his life.

He had attempted to warn his grandmother when she first insisted that she desired Miss Conwell as her companion that the minx was nothing but trouble. Unfortunately, Lady Woodhart was quite as stubborn as himself and nothing would convince her that the young maiden was nothing more than a clever charlatan.

“I want you to explain in words clear enough for my feeble brain to comprehend how you allowed a common fortune hunter to take advantage of my grandmother in such a disgraceful manner.”

Well aware the looming gentleman could no doubt twist him into a knot as intricate as the one that currently graced his starched cravat, Mr. Grady carefully considered his words. “Actually Miss Conwell was no more aware of the contents of the will than you were, my lord. And I fear just as displeased when she discovered the terms.”

The Wedding Clause is available in the following formats: