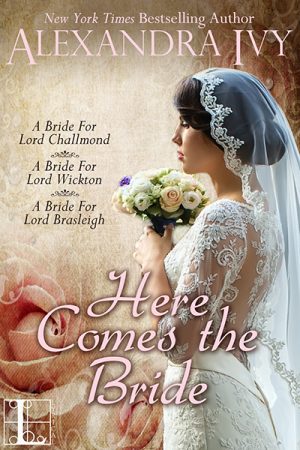 Long before I wrote my sexy paranormal romances, I wrote traditional Regency romances as Debbie Raleigh. Now I’m delighted that three of my favorites are available once more. This trilogy features three dashing rakes returning home from war. But along the way, a gypsy predicts that love will trap them all. Their high-spirited response? A daring wager! By June the first, whomever Cupid catches must forfeit one thousand pounds and a red rose . . .

A BRIDE FOR LORD BRASLEIGH
Philip Marrow, Lord Brasleigh, must marry off his troublesome ward, Miss Bella Howe. But determined to wed for love, Bella has run away, and Philip must track her down. Since he has never met her, he plans to play the rogue and scare her back to London. He never expects to ignite an overwhelming passion . . . or find a lady who fights fire with a clever scheme all her own . . .

A BRIDE FOR LORD WICKTON
Barth Juston, Earl of Wickton, assumes a woman would be grateful to accept an arranged marriage with him. What a shock that beautiful Isa Lawford is not! In fact, she insists she prefers someone else! Now this overconfident lord is about to enter the most perilous battle of all: a fight for a woman’s heart . . .

A BRIDE FOR LORD CHALLMOND
Simon Townsled, Lord Challmond, is off to his Devonshire country estate, where he is sure to be safe from feminine wiles. But he doesn’t count on feisty do-gooder Miss Claire Blakewell—who is as determined to march down the aisle as he is to avoid it . . .

I’ve fallen head over heels for these timeless books all over again, and believe that you will too. 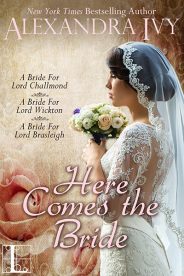 The three dashing gentlemen attracted more than their share of attention as they rode through the Italian countryside. Tall, handsome, and in possession of that rare arrogance that comes from wealth and position, they were the darlings of the small British society that had recently flocked to Rome. It was a position they relished after the brutal hardship of war. Forming a select guard that had escorted the Pope in his return to the Vatican, they had lingered into the summer months, enjoying the splendid entertainments and luscious local ladies. And in truth, none of the three was in any hurry to return to England despite the fact they had sold out their commissions.

Time enough to return to the responsibilities that awaited them at home. For now they wished only to rejoice in the pleasure of being alive.

Simon Townsled, seventh Earl of Challmond, sucked in a deep breath of the scented air. Overhead, the impossibly blue sky shimmered with the summer heat. It was a heat he welcomed. Since being wounded several weeks before, he often battled a persistent chill.

Now he lifted his dark, aquiline countenance to the sunshine. In the distance he could hear the echo of angry shouts, but it was not until a sharp scream pierced the air that he was shaken from his pleasant daydreams. Pulling the large mount to a halt, he turned to regard his companions with a startled expression.

“Damn,” Barth Juston, Lord Wickton, cursed as he pointed toward the nearby field.

Simon shifted in his saddle to view the half dozen roughly dressed men that appeared to be circling a— by gads, it appeared to be an old woman. Realization hit the same moment another scream echoed through the air. A fierce scowl marred the elegant beauty of Philip Marrow, Lord Brasleigh’s, features.

“Come,” he commanded as he urged his stallion into a full gallop. Simon and Barth were not far behind.

Together they plunged through the overgrown field toward the small crowd. At a signal from Philip the three split apart, rounding the unaware men and approaching from different angles. It was a tactic they had used in battle, and not surprisingly they easily managed to charge through the crowd and place themselves between the men and the elderly woman now huddled beside a large rock.

Simon withdrew a pistol and shot it into the air, hoping to frighten the men off. Although he was an excellent marksman, he dearly hoped he would have no need to defend himself. He had seen enough blood for a lifetime.

“Move along,” he commanded in stern tones.

For a moment the men glared at the intruders, clearly debating whether to challenge the mounted gentlemen. Then, noting the hard expressions and military bearing, they reluctantly began backing away. Simon held his breath as more than one raised a fist to shake it in his direction, but realizing their sport was at an end, they retreated toward a nearby village. Barth was already off his horse and helping the shaken woman to her feet.

Simon and Philip dismounted to join him, exchanging a silent glance as they recognized the tattered clothing of a Gypsy. That certainly explained the reason for the attack, Simon thought with a sigh. Locals often blamed their troubles on the Gypsies. Old customs and superstitions died hard.

“Are you hurt?” Barth demanded, his rakish countenance uncommonly somber as he gently helped the old woman to her feet.

“No.” The woman offered them a tentative smile as she brushed the twigs and dirt from her skirt. “Grazie.”

Still on alert, Philip glanced toward the cluster of buildings atop the nearby hill. “We should get her away from the village.”

Barth gave a sharp nod of his head. “Can you lead us to your home?”

Here Comes the Bride is available in the following formats: