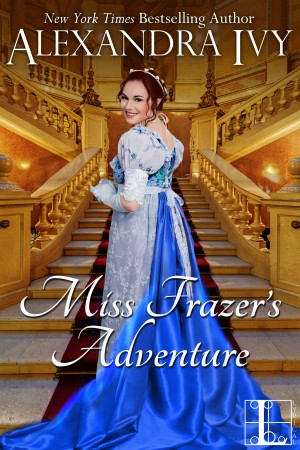 Long before I wrote my sexy paranormal romances, I wrote traditional Regency romances as Debbie Raleigh. Now I’m thrilled to have them made available once more, as fresh and adventurous as ever…

To avoid the taint of her mother’s scandalous reputation, Miss Kate Frazer stifles her naturally high spirits to become a model of propriety. But when she is rewarded with a suitor who cares only for her dowry—and leaves her waiting at the altar on her wedding day—Kate determines that she will live as she chooses. Her first adventure will be a trip to London under an assumed name to enjoy the city’s delights. And woe to anyone who stands in her way—particularly her fiancé…

Lucius Calfield wasn’t looking forward to wedlock with the tediously suitable Kate Frazer. Still, he is chagrined when a violent storm makes him late for the ceremony. But embarrassment turns to astonishment when he finds that his fiancée has vanished entirely! And that is the least of the surprises his unaccountably changed—and unexpectedly irresistible bride—has in store…

I’ve fallen in love with these timeless books all over again, and believe that you will too.

As far as weddings went, the wedding between Lucius Jonathon Duval, Earl of Calfield, and Miss Katherine Frazer could be considered an extravagant, spectacular . . . failure. Oh, the blame could not be attributed to the small church, despite its being crammed to the rafters by the crush of elegant guests. Nor upon the bride, who stood at the altar with her countenance nearly as pale as the ivory dress she had chosen for the solemn occasion. Nor even upon the vicar, who had obviously imbibed heavily from the silver flask he kept concealed beneath his robes. Weddings by tradition included overcrowded churches, pale brides, and vicars who felt the need to succor their nerves with a swig of brandy. No. The disaster could be attributed entirely to the groom. A groom who had never bothered to make his appearance . . .

Four hours after being abandoned at the altar, Kate Frazer paced through her bedchamber. It was a beautiful room. A spacious affair that her father had commanded thoroughly refurbished when he had purchased the estate five years before. Drenched in pale blue and ivory, it boasted a magnificent view of the Kent countryside and the rarified scent of pure wealth. A perfect setting for the proper, dutiful daughter of Sir Archibald Frazer. Today, however, Kate took little notice of how her satin slippers sank into the floral carpet. Or how the mullioned windows reflected the pale November sunlight. Instead she battled the urge to hit something. Preferably the handsome countenance of her treacherous fiancé. Damn and blast Lucius Jonathon Duval, Lord of Calfield. It had been bad enough to know that the man was merely marrying her for the vulgarly large dowry her father had offered. And that during their brief engagement, he had called upon her on less than a half dozen occasions, and then, she was convinced, only to ensure that she had not met an untimely end and deprived him of his windfall. And now . . . this. Reaching a small pier table that held a particularly ugly collection of china figurines that had been an engagement gift from Lord Calfield’s aunt, Kate was about to turn and resume her pacing when she abruptly halted. For a moment she glared at the hapless treasures. And then she did the unthinkable. Or at least the unthinkable for a maiden who was always proper, always dutiful, and always anxious to please others. Plucking a delicate figurine from the table, she turned and launched it at the door. Rather to her surprise, the sound of splintering china provided a distinct sense of satisfaction. Perhaps not as satisfying as tossing the projectiles at Calfield’s golden head,

Miss Frazer’s Adventure is available in the following formats: