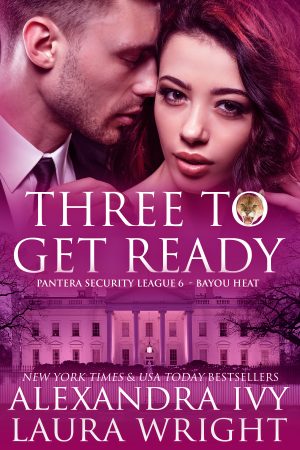 THREE TO GET READY

A Need To Kill

Gorgeous Pantera spy, Nael has been given one job. Find the asset and bring it back to the Wildlands. An easy task for a male who has an entire network of high-powered contacts spread around the world. In and out, and off to the next job. No complications.

That is, until a feisty and very sexy female drops into his arms. Literally.

A Fight For Love

Beautiful, ruthless, Miranda wants one thing; to rip out the heart of the bastard who’d held her captive and killed her sister. But the male continues to elude her. Then she discovers Nael, a frustratingly hot male Pantera, who promises to help her destroy her enemy. 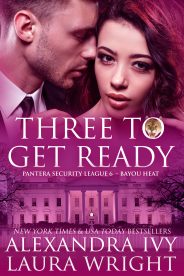 Nathanael deliberately chose a restaurant in the 1stWard near the Mississippi River for his meeting with Raphael. At a glance, the place looked like a dive. The front was narrow, with faded bricks and a black awning that flapped in the breeze. Inside wasn’t much better. The wooden floor was warped, and the strands of lights in the open-beamed ceiling barely offered enough illumination to reveal the cramped booths that surrounded the large bar in the middle of the dining room.

The place made no effort to attract the hordes of tourists who swamped the city, but every local knew that they served the best gumbo with beer bread in town.

And since Nael had made the effort to become close friends with the owner, he was always given a table on the small balcony that not only offered a view of the slow-moving river, but granted him the privacy he desired.

After all, he was a ghost. One of the six elite members of the Pantera Security who worked undercover. Which meant he had to take care not to be spotted by any of his fellow puma-shifters. Or goddess-forbid, any members of his family.

As far as they knew, he was dead.

Strolling through the back door, he headed toward the specialized cooler at the front of the kitchen. He ignored the lingering glances from the waitresses. He was used to females who were fascinated by his square, chiseled male features that were more compelling than handsome and the brilliant blue eyes that were surrounded by a rim of pure jade. His body was solid with muscles that were hard as stone beneath the black slacks and crisp white shirt, sleeves rolled up to show his forearms. His dark brown hair was kept short, emphasizing the hint of smooth sophistication.

He was well aware that a large part of their fascination stemmed from the pheromones that were a natural part of his shifter nature. When it came to sexual charisma, nothing could beat puma musk.

Grabbing a six pack of Raphael’s favorite house-brewed beer, Nael placed it on a tray, along with two bowls of steaming-hot gumbo and a freshly baked loaf of bread. Then with a nod toward the beefy chef, who was barking orders to his crew, he headed toward the narrow flight of stairs that led to the balcony and the unexpectedly cool afternoon air.

He’d just finished placing the tray on his favorite table next to the iron railing and settling into one of the chairs when the sound of heavy footsteps warned of Raphael’s approach.

Grabbing a beer and popping off the cap, Nael took a deep pull of the crisp ale, not bothering to glance over his shoulder. He could already feel the thunderous force of the older male’s power before Raph crossed the wooden planks and dropped into the chair across from him.

Raphael was technically the leader of the Suits, or the diplomatic arm of the Pantera, but everyone knew that he’d taken control of the puma-shifters ever since the elders had retreated from their leadership role. He was a certified badass. A trait Nael both understood and respected.

The large male with pale hair and golden eyes was wearing jeans and a cream sweater that was stretched across his broad chest. But it was the fierce heat in his eyes that caught Nael’s attention.

The male was born a diplomat. Which meant he had the ability to control his temper, even when he was in the middle of a shit-storm. But Nael could easily sense the frustration that was snapping and popping just below the surface.

Three To Get Ready is available in the following formats: