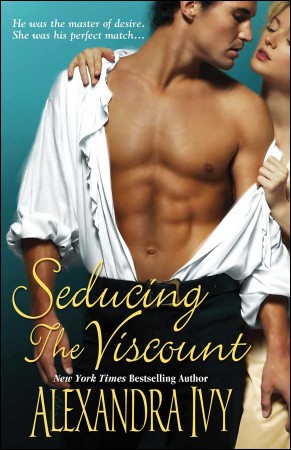 Illegitimacy is no obstacle for Ian Breckford. Darkly handsome and thoroughly charming, he has bedded his way through London’s most exclusive society. Yet this pleasurable existence has lately seemed a trifle dull–a fact soon remedied by a visit to his father’s estate, where his aunt has acquired a delightful new companion. Mercy Simpson may be shy, but she is also sharp-witted and stubborn, especially when persuading Ian to relieve her of her innocence. . .

Ian’s arrival presents the opportunity for Mercy to experience uninhibited sensual adventure before she returns to her spinster life. Ian’s extraordinary skill is everything she dreamed a lover might offer–and everything she can never hope to keep. . .unless her brazen seduction can ignite a true, lasting passion. . . 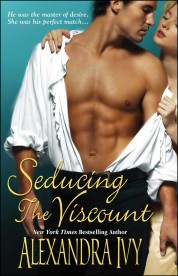 Raoul Charlebois with his white-gold hair and piercing blue eyes was accustomed to crowds gaping and fawning over his elegant beauty. As the most renowned actor in all of England it would be more shocking if he could walk into a room without causing a stir.

Even Ian Breckford was familiar with such titillated interest.

Known throughout London as Casanova, he possessed a dark, sultry beauty that had captivated women from the moment he had left the cradle. He might not comprehend their fascination with his golden eyes that were framed by sinfully long lashes, or the thick ebony curls that tumbled carelessly about his lean, fiercely male countenance, but he was always swift to take advantage of their enthrallment.

The same way he was always swift to take advantage of those gentlemen foolish enough to sit down opposite him at a card table, or wager against him in boxing ring.

He might have been born a bastard, but he had forged a position among society that even the most aristocratic gentlemen envied.

Now he lifted a glass of his favorite whiskey in a mocking toast.

“To Fredrick,” he announced, a cynical smile playing about his full lips. “May his honeymoon be delectable enough to compensate for the years of being shackled in holy matrimony.”

Raoul touched his glass to Ian’s, his own expression one of satisfaction. Typical. Although Raoul had been fostered by Mr. Dunnington at the same time as Fredrick and Ian, he had swiftly taken on the role of older brother and devoted himself to bullying, encouraging, and at times comforting his young charges. Dunnington might have been the father they had so desperately needed, but it was Raoul who had rushed to Fredrick’s rescue when the local ruffians attempted to rob him of his coins, and thumped Ian soundly when he caught him cheating at cards.

Now the ridiculously handsome man was nearly preening at the thought that Fredrick had managed to wed a woman he clearly adored.

“I do not believe he will object to being shackled to Portia. Indeed, he has never appeared more content with his lot in life.”

Ian gave a sharp laugh. “Well, he always did have an appalling preference for the dull and tedious sort of existence. Why else would he tinker with those ridiculous gadgets of his?  No doubt he shall feel quite at home as a respectable husband and heir apparent to Lord Graystone.”

Raoul grimaced. “At least once he forgives his father for keeping his legitimacy a secret all these years.”

“Ah yes. The infamous secret.”  Ian tossed the whiskey down his throat as he recalled the moment the three of them had discovered that Dunnington had left them each a legacy of twenty thousand pounds on his death. Money that the tutor had extorted from their respective father’s to keep some deeply hidden secret…well, secret. Fredrick had traveled to Winchester to find the truth and learned he was not the bastard he had always been named, but instead Lord Graystone’s legitimate heir. A discovery that was bound to change his life forever. “I suppose we knew when we heard of Dunnington’s legacy that our dear papas must harbor something dark and wicked in their pasts. But to have allowed Fredrick to believe he was a bastard just to gain Wilhelmina Burke’s dowry…well, that is one hell of a skeleton in the cupboard. It makes a wise man consider leaving his own skeletons alone.”

Raoul shrugged, but his eyes were watchful as he studied Ian’s tense features. “There are any number of bastards who would be delighted to discover they are true bloods.”

“Devil a bit.”  Ian shuddered, quick to refill his glass with the whiskey from his flask. “I cannot think of anything more hideous.”

“Why?” Raoul gave a lift of one pale, perfect brow. Everything about Raoul was perfect. “Your father is one of the wealthiest gentlemen in all of England. Not to mention he possesses a near dozen homes and estates from here to Scotland. As his heir you would become one of the most respected and powerful men in the world.”

Seducing The Viscount is available in the following formats:

All about Illegitimate Bachelor →