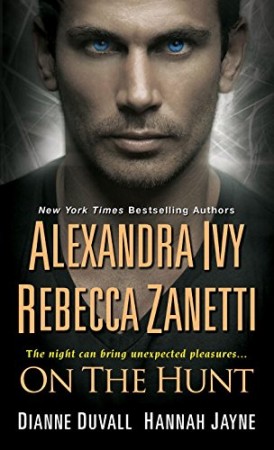 Four of today’s most intriguing paranormal authors entice readers deep into the shadows, where vampires, immortals, and other supernatural creatures heat up the night…

On The Hunt by Alexandra Ivy

Mika Tanner has loved Bailey Morrell, a beautiful Healer, since childhood. But his duty as a Sentinel, a supernatural guardian of an ancient race, clashed with her rebellious spirit. Now a dangerous new anarchist group not only threatens life as they know it—but any chance of their being together again…

With a deadly disease spreading like wildfire across the country, microbiologist Nora Medina needs to focus all her energy on stopping the pandemic. Playing with dynamite—in the form of her way-too-hot ex—is the last thing she should be doing. ​But forced to work with Deacan McDougall against unexpected enemies with the seconds ticking by, she knows the explosion is coming…

Immortal Yuri Sokolov was born with the ability to see spirits, yet he’s never seen one as lovely as Cat Seddon, the woman who haunts his home and his dreams. But amid their star-crossed love, a new danger may have Yuri facing a different kind of eternity.

Stake Out by Hannah Jayne

Vampire fashion designer Nina LaShay has a lot on her plate—just two days until fashion week and the model who was flirting with her photographer boyfriend is now a corpse in her studio. But when dead turns into undead and dangerous, Nina must find out who’s responsible…before the beautiful baby vamp takes too many bites out of the Big Apple. 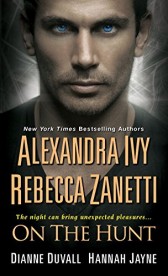 It was no surprise that the history of the high-bloods had been lost in the midst of time.

Although they’d been worshipped as gods in ancient times, their powers had eventually caused an overwhelming fear and envy among the humans. They went from being revered, to being hunted as if they were dangerous beasts.

In an attempt to save their people they’d gone into hiding.

For centuries they remained in the shadows, still using their powers, but keeping them secret from the world.

Then, with a slow caution, they began to band together, creating communities where they could help to defend each other. Witches, necromancers, healers, psychics, clairvoyants and a dozen other types of high-bloods all living together.

The largest of the communities was Valhalla. A sprawling compound in the Midwest that was protected by a dome of impenetrable magic. It was also defended by Sentinels, the monk trained warriors who were defenders of the high-bloods.

The Sentinels were divided into two groups.

Those warriors born with magic who were chosen to be the personal guards to the high-bloods. They were marked with tattoos that protected them from magic or any attempt to manipulate their minds.

Then there were the hunters. Although they didn’t have magic they were faster, stronger and far more lethal than a mere human. And without the distinctive tattoos of their brothers they were able to move through the world without attracting attention.

They were the enforcement for their people. They tracked down renegades and those high-bloods who were a danger to themselves or others.

No one, no matter how powerful they might be, wanted to attract the attention of a hunter.

There was no place you could hide…

The location of Valhalla, the main home of the high-bloods wasn’t a secret.

Even with a magical dome of protection, it was tough to hide several thousand acres of land smack dab in the middle of the United States with two dozen structures that included living quarters, workshops, garages, barns, and a school.

Of course very few ‘norms’ were allowed through the magical barriers to visit the central building that was constructed in the shape of a pentagon with an inner courtyard that was famed for its gardens. And those who were found themselves confined to the upper floor that was reserved for official offices and formal reception rooms, plus a small number of guest rooms if the visitors were expected to stay more than a few hours.

Only high-bloods were allowed into the nine lower levels that contained private quarters and secret labs that were dug deep into the earth.

And only Sentinels were allowed on the bottom floor that was reserved exclusively for their use.

With a central room that was dominated by a state of the art computer system and heavy wooden furniture it looked like something out of a James Bond movie.

Two walls were lined with monitors that were connected to dozens of satellites and surveillance equipment spread throughout the world. On another wall were several doors that were closed and monitored with motion and heat sensors. The weapons that they kept inside were not only lethal, but many were magically enhanced to create enormous damage.

Standing in the attached private office the two Sentinels stood face to face.

At a distance the warriors were remarkably similar.

Both had long dark hair that framed narrow faces with copper-toned skin and eyes as black as polished ebony. Both had the lean, chiseled muscles of trained warriors. And both were wearing casual jeans and T-shirts that did nothing to disguise their lethal power.

A closer glance, however, revealed that Wolfe, the leader of the Sentinels, had a streak of white in his hair at his right temple and that his features had been hewn in the deserts of the Middle East.

Mika Tanner, on the other hand, shared the chiseled features of his Native American ancestors.

Over the years, his stark beauty had attracted the notice of woman. A lot of women. But none had managed to capture his aloof attention.

Of course, his lack of interest only made them more determined to be the one to claim him.

Not that Mika noticed.

Hell that was the problem.

In one spectacular case he’d loved a woman.

Now he was dedicated to his duty as a hunter Sentinel. Nothing was allowed to distract him.

Which was why he’d abruptly walked away from the pretty witch who’d been trying to convince him to join her for dinner the second the text from Wolfe had hit his phone.

Folding his arms over his chest, he studied Wolfe with a stoic curiosity.

“Here.” Getting straight to the point, Wolfe shoved a file folder into Mika’s hand. The Tagos (leader of the Sentinels) was never big on chit-chat.

On the Hunt is available in the following formats: