In a stunning new series, Alexandra Ivy lures readers into the dark, seductive world of the Sentinels—humans outcast by their hidden abilities, treading the line between life and death, good and evil, pleasure and pain…

In The Heart Of Darkness

Lies The Kiss Of Death

Unlike the other “high-bloods” in Valhalla, Callie Brown considers her abilities a gift, not a curse. But when she reads the dancer’s final thoughts, she senses a powerful presence blocking her vision. This is no ordinary homicide. This is the work of a legendary necromancer who controls souls. A ravenous force that will put Callie’s skills to the test, O’Conner’s career at risk, and both their hearts on the line…literally. 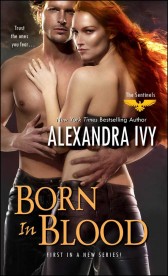 Valhalla had always been shrouded in mystery.

Named for the home of the Norse gods, the leaders of the sprawling compound claimed that it was a safe-house for those people too unique to live among normal society.

Of course, everyone knew that was just a polite way of saying that it was a home for freaks.

Witches, psychics, necromancers, Sentinels and God only knew what else roamed the grounds protected by a layer of powerful spells.

For the past century, Valhalla had been a source of fear and fascination throughout the entire world, but most especially for the citizens of the small, Midwest town that could see the shimmer of blue reflecting off the protective dome that hid the buildings from view.

Not surprisingly, there were citizens who called for the entire place to be nuked.

The freaks were dangerous, they insisted, with powers that none of them truly understood.  Who knew what the monsters would do if someone pissed them off?

Then there were others that said they should be locked away and studied like lab rats.  Perhaps their mutations could be used to help normal people.

Most, however, preferred to ignore Valhalla and the high-bloods…as they preferred to be called…living behind the dome.

Until, of course, they needed them.

Sergeant Duncan O’Conner was late to the party.

Nursing a hangover from hell, he took two painkillers with a gallon of hot coffee and steered his POS cop car through the light Sunday traffic and entered the gated community in the southwest suburbs.

The call had hit his cell phone at three in the afternoon.  An hour before he’d hauled his sorry ass out of bed.  It’d taken another half hour under the shower to peel his throbbing eyes open and get rid of the stench of cheap whiskey and even cheaper cigars.

His first thought had been to call in and tell them to find someone else.  Wasn’t it supposed to be his damned weekend off rotation?  Let Caleb deal with the latest stiff.

Then the thought that the entire station would suspect he’d spent the night of his ex-wife’s latest wedding getting shit-faced drunk sent him stumbling to his car.  Yeah, cause his bloodshot eyes and old man shuffle wasn’t going to give the game away, he acknowledged wryly.  But while he could take the razzing, he couldn’t take the thought of them feeling sorry for him.

Entering the cul-de-sac, Duncan parked his car and headed into the brick house.  He ignored the speculative glances from the neighbors that had gathered in a little clutch across the street.  He was accustomed to females checking out his spare, well-honed body shown to advantage in a pair of faded jeans and black tee.  Even with his short, pale blond hair damp from the shower and his stubborn jaw shadowed with a golden stubble, he had the look of a man who knew what to do with a woman.  Match that with a pair of hazel eyes that sparkled with wicked charm and they were like putty in his hands.

The men tended to be more interested in the gun holstered at his side and the hard expression on his lean face that warned he only needed an excuse to kick someone’s ass.

His own attention was focused on the house as he stepped into the small, but elegant foyer.  Not the sort of house a young woman could afford without some help.  From daddy.  Or more likely, from sugar daddy.

Not that he was being sexist.

He couldn’t afford a damned tool shed in this frou-frou neighborhood.  Even if his old da chipped in every penny he made driving a cab.

Born in Blood is available in the following formats: