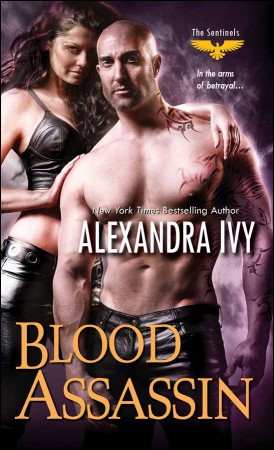 They are the outcasts of humanity. Blessed with power. Cursed by fate. Driven by passion. The Sentinels have returned. . .

Out Of The Shadows

At six-foot-three and two-hundred-fifty pounds, Fane is a natural born guardian. A flawless mix of muscled perfection and steely precision, he has devoted years of his life to protecting a beautiful necromancer. But after she found love in the arms of another, Fane has been a warrior adrift. He swears allegiance only to the Sentinels. And no woman will ever rule his heart again. . .

Not only a powerful psychic, Serra is that rare telepath who can connect to minds through objects. When the daughter of a high-blood businessman is kidnapped, Serra agrees to help. But when she stumbles onto a conspiracy involving secrets sects and ancient relics, her life is in mortal danger–and Fane is her only hope. Is the warrior willing to risk his body, his soul, and his heart, for Serra? Or will one last betrayal destroy them both? 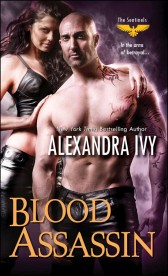 The history of the Sentinels was mysterious even among the high-bloods.

Most people knew that there were two sects of the dangerous warriors.  The guardian Sentinels who possessed innate magic and were trained by the monks.  They were heavily tattooed to protect themselves from magical attacks, as well as any mind-control and were used to protect those high-bloods who were vulnerable when they were forced to travel away from the protection of Valhalla.

And then there were the hunter Sentinels.  They had no magic,  but they were equally lethal.  Hunters were used to enforce the laws of Valhalla, and since they were able to ‘pass’ as human and capable of moving through the world undetected, they were used to track down high-bloods who might be a danger to themselves or others.

It was also well known that both sects of Sentinels were stronger and faster than humans, with an endurance that was off the charts.  And both were trained to kill with their hands as well most known weapons.

But that was as far as public knowledge went.

How they were chosen and how they’d become the protectors of the high-bloods were closely guarded secrets.

No one but Sentinels knew what happened behind the thick walls of the monasteries where they were trained.

One glance into the private gym would send most humans fleeing in humiliation.

What normal male would want to lift weights next to the dozen Sentinels?

Not only were the warriors six foot plus of pure chiseled muscles and bad attitudes, but the very air reeked of aggression and testosterone fueled competition.

Hardly a place for the weekend jock trying to battle the bulge.

It was, however, the perfect place for the Sentinels to work off a little steam.

The vast gym was filled with mats, punching bags, and treadmills.  And. at the back of the room, there was a row of weight machines where the baddest of the bad-asses was currently bench-pressing enough weight to crush a mortal.

Fane looked like he’d been sculpted from stone.  A six foot three behemoth, he had the strength of an ox and the speed of a cheetah.  A result of the natural talents that came from being born a Sentinel, and the fact he’d been honed from his youth to become a weapon.

He was also covered from the top of his shaved head to the tips of his toes in intricate tattoos that protected him from all magic.

The monks who’d taken him in as a young child had trained him in all the known martial arts, as well as the most sophisticated weapons.

He was walking, talking death.

Which meant very few bothered to notice the dark eyes that held a razor-sharp intelligence or the starkly beautiful features beneath the elegant markings.

Something that rarely bothered Fane.  For the past decade he’d been a guardian to Callie Brown.  All people needed to know about him was that he would kill them the second they threatened the young diviner.

Fane blew out a sigh, replacing the weights on the bar so he could wipe the sweat from his naked chest.

Three months ago Callie had nearly died when they’d battled the powerful necromancer Lord Zakhar, and during the battle she’d fallen in love with a human policeman.  Or at least Duncan O’Conner had been passing as human.  Turned out he had the extra powers of a Sentinel as well as being a soul-gazer, which meant he could read the souls of others.  He was perfectly suited to take over the protection of Callie.

Fane’s hand absently touched the center of his chest where he’d once felt the constant connection to Callie.  They’d transferred the bond last week, but he still felt the strange void that was wearing on his nerves.

He needed a distraction.

The thought had barely passed through is mind when a shadow fell over him and he glanced up to discover a tall, lean man with copper-tinted skin and ebony eyes.  Wolfe, the current Tagos (leader of all Sentinels) had a proud, hawkish nose, with heavy brows and prominent cheekbones gave him the appearance of an ancient Egyptian deity.

It was a face that spoke of power and fierce masculinity.  The sort of face that intimidated men and made women wonder if he was as dangerous as he looked.

Just as arresting was the shoulder-length black hair that had a startling streak of gray that started at his right temple.  There were whispers that when Wolfe was a babe he’d been touched by the devil.

Swallowing a curse, Fane tossed aside his sweaty towel.  Damn.  This wasn’t the distraction he’d been wanting.

Wolfe was dressed in jeans and a loose cotton shirt with the sleeves rolled up to his elbows.  He had his arms folded over his chest and was studying Fane with an expression that warned he wasn’t pleased.

Around them the gym went silent as the other Sentinels pretended they weren’t straining to overhear the potential confrontation.

“I heard through the grapevine you’ve taken a position as a trainer,” he said.  That was Wolfe.  Always straight to the point.

Fane scowled.  It’d been less than twenty four hours since he’d made the decision to seek a position as trainer in a monastery half way around the world.  How the hell had word spread so fast?

“The grapevine should mind its own business.”

The ebony eyes narrowed.  “And I shouldn’t have to listen to gossip to learn when one of my Sentinels is leaving Valhalla.”

Fane met his Tagos glare for glare.  “I have no direct duties here, at least not anymore.  I’m allowed to return to the monastery without clearing it with you.”

The air heated.  Sentinels’ body temperature ran hotter than humans, and when their emotions were provoked they could actually warm the air around them.

“Don’t be an ass.  This isn’t about duties, I’m worried about you.”

This was exactly what Fane didn’t want.

He’d rather be shot in the head than have someone fussing over him.

“There’s nothing to worry about.  You know that I was a trainer for years before coming to Valhalla.  I’m simply returning to my brothers in Tibet.”

“You’ve just endured the removal of a long-standing bond.  A traumatic experience for any guardian,” the older man ruthlessly pressed.  “And we’re your brothers, you thankless son-of-a-bitch.”

Blood Assassin is available in the following formats: