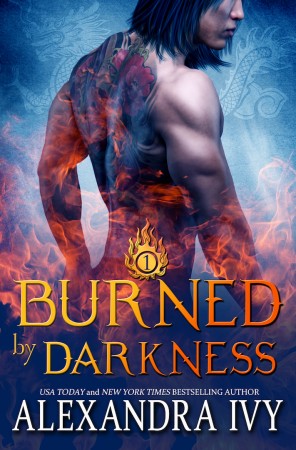 Book 1 in Dragons of Eternity

The Dragons of Eternity were once creatures of mist and legend. Now they’ve returned to the world, prepared to claim what’s rightfully theirs…

Tayla is desperate for a place to call home. After years on the run, the young imp impulsively buys a teahouse and is determined to build a new life. Unfortunately, she’s barely opened the doors when she’s tracked down by the dragon who purchased her from troll slave-traders. He demands she pay off her debts…in his harem.

Baine has devoted a quarter of a century to tracking down his beautiful concubine. And now that he has her in his grasp, he’s not about to let her go. But it’s soon apparent that he isn’t the only demon hunting her. He must uncover her secrets or risk losing her forever. 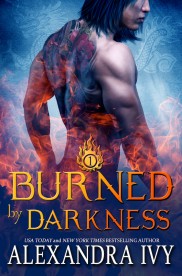 From the moment I introduced the mysterious dragon, Baine, in Darkness Avenged I knew that I wanted to know more about him. He was cunning, elusive, with a hint of dark secrets in his past. Even better, he was lethally sexy. The perfect hero. My GUARDIANS OF ETERNITY, however, already had a large cast of vampires and Weres and fey creatures. There wasn’t much room for Baine and his equally fascinating friends. Which was why I came up with a new spin-off, THE DRAGONS OF ETERNITY. For those who haven’t read my previous series, this is a perfect place to start. And for those who have enjoyed the Guardians, I can promise there will be a few scenes with your favorite gargoyle, Levet!

I hope you enjoy Baine’s story!

“Are the shades lowered?”

Tayla’s lips twitched at the sound of the French-accented voice that floated from the attics.

“I’m doing it now,” she called back, pressing the button near the door that would slide thin panels over the windows that blocked out direct sunlight while still allowing her a clear view.

It was a bonus feature that she’d had installed only last week. She might be an imp who adored the warm rays shining into every room, but her current houseguest turned to stone in the sun.

After all, she’d spent the past twenty-five years on the run, constantly aware that she was being hunted.

That overwhelming sense of being stalked had been like a dark cloud hovering over her head, forcing her from one hiding place to another.

But from the second she’d caught sight of the large Victorian home just south of Chicago she hadn’t been able to get it out of her head.

The three-story house had the usual wings and bays, with a wraparound porch, gabled roof and gingerbread wood trim. It was painted a pretty pink with white shutters, and was surrounded by a large garden and rolling vineyards that gave a sense of peaceful isolation.

And everything she’d ever wanted in a home.

Plus it had the added benefit of being a perfect spot to set up an elegant teahouse.

Giving in to the rare impulse, Tayla purchased the property and hired a witch to come and wrap several disguise spells around the property. As an imp, she had her own fey magic—specifically, enchanting items so her customers would crave her delicate pastries—but she couldn’t create complicated spells.

She needed to make sure she was well hidden from her stalker—or perhaps it was stalkers—if she intended to stay in one place more than a few days.

Over the past months she hadn’t regretted her choice to settle down, although she’d discovered that she didn’t enjoy being alone in the large house at night.

She wasn’t afraid. Not exactly.

Which no doubt explained why she’d given in to the persuasion of the miniature gargoyle who’d unexpectedly arrived on her doorstep two weeks ago.

She smiled as the door that led to the attic was pushed open and a tiny creature who stood no more than three feet tall waddled into the room.

He had the usual gray, leathery skin and grotesque gargoyle features, complete with horns and a long tail he kept meticulously polished. His wings, however, were anything but usual.

Larger than normal, they were as lacy as the wings of a dew fairy and swirled with brilliant blues and crimsons and gold.

He also had a charming French accent and a habit of making her laugh when he mangled the English language.

He’d requested rooms in the attic for his brand-spanking-new dating service, and she’d agreed. Why not? It would bring in additional customers, and she wouldn’t be alone every night.

It was an arrangement that’d worked out well.

Now he followed her as she moved through the front salon filled with overstuffed chairs and round tables covered by frilly doilies. With a brisk efficiency, she made sure the cups and dishes had all been returned to the china cabinets and that the floral carpets were vacuumed.

Then, together they headed down the short hall and entered the kitchen she’d had remodeled after moving in. The large room had a white tiled floor and open-beam ceiling where copper pans were hanging from long hooks. The appliances were all top of the line, stainless steel that’d cost her a fortune. And in the middle of the floor were long, wooden tables that she’d hand-carved with fey glyphs to add the enchantments to her pastries.

Best of all, the far wall had a bank of windows that overlooked the heavily wooded acreage that’d come with the property.

She paused to admire the sight of the trees in full autumn glory. Her fey blood ached to be surrounded by nature even as she appreciated all the modern conveniences.

There was a soft ding as her oven timer warned her she needed to remove the scones she’d prepared for their late tea. Since Levet’s arrival she’d encouraged him to share at least one meal a day with her. It was a genuine pleasure not to have to eat alone.

Grabbing a towel, she reached in to pull out a tray, setting it on the table just as the demon held up his hand to reveal the bottle he’d had hidden behind his back.

Burned by Darkness is available in the following formats: