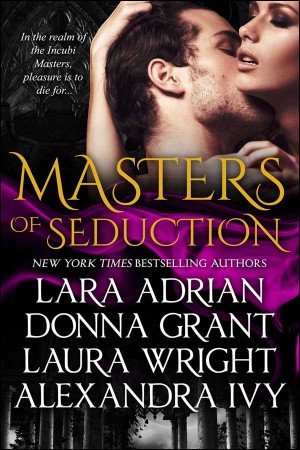 In the realm of the Incubi Masters, pleasure is to die for and love is the deadliest game of all . . .

Ruthless: House of Xanthe ~ by Alexandra Ivy
Jian, Master of the House Xanthe, has devoted his life to returning his family to their former prominence. When he’s offered a contract to hunt down the missing Sovereign, he’s eager to accept. The last thing he expects is to encounter a stunningly beautiful angel who stirs more than his lust.

Merciless: House of Gravori ~ by Lara Adrian
Seeking vengeance for the murder of his brother, Incubus Master Devlin Gravori demands justice from the high court of the Nephilim. But fury and retribution are no match for the consuming desire he feels for Nahiri, the beautiful Nephilim warrior he claims as his hostage.

Soulless: House of Romerac ~ by Donna Grant
Incubus Master Canaan Romerac is focused solely on revenge against those who betrayed him and put him in the Oubliette for five hundred years. That is until he sets eyes on Rayna. Can the beautiful Nephilim heal Canaan’s wounded soul before it’s too late?

Shameless: House of Vipera ~ by Laura Wright
Sexy Incubus Master Scarus Vipera has grown weak, and the only thing that will strengthen him again is Rosamund, the power-rich female of the Harem. But the mysterious Nephilim is determined to leave the Harem untouched, her heart intact. 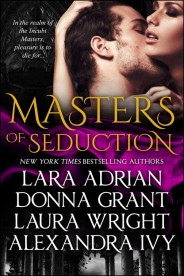 Masters of Seduction: Books 1-4 is available in the following formats: