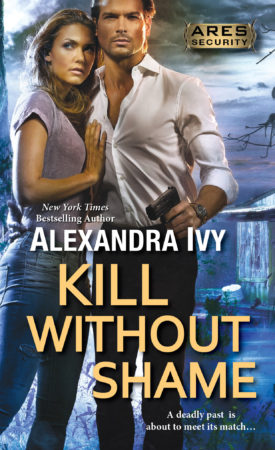 Five brave military heroes have survived the hell of a Taliban prison to return home—and take on civilian missions no one else can. They’re the men of ARES Security. Highly skilled, intimidating, invincible, and one by one, tested again and again…

Lucas St. Clair’s prestigious family had a political future neatly planned out for him—one that didn’t include his high school sweetheart, Mia Ramon. Under their pressure, Lucas gave her up. But since surviving captivity, he’s a changed man—and a crucial member of ARES Security. When he discovers a dead man clutching a picture of Mia that bears a threatening message, his fiercest protective instincts kick in, and he knows he must go to her.

Mia has never forgiven Lucas for breaking her heart, and she’s convinced her feelings for him are in the past. But it’s soon clear that isn’t true for either of them. Now, determined to solve the crime and keep Mia safe, with his ARES buddies backing him up, Lucas will have to reconstruct the murder victim’s last days—and follow a lethal trail that leads right back to the fate of the woman he still loves…

“A fantastic blend of romance and suspense…thrilling to the end.” –Mary Burton, USA Today bestselling author on Kill Without Mercy 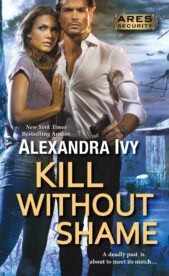 The worst part of being held in a Taliban prison was the nightmares.  At least as far as Lucas St. Clair was concerned.

No matter many years passed, his nights were still plagued with memories being trapped in the smothering darkness of the caves.  He could smell the stench of unwashed bodies and undiluted fear.  He could hear the muffled sounds of men praying for death.

He knew that his parents assumed that his biggest regret was the derailment of his political aspirations.  After all, his military career was intended to be the first step in his climb to a position as a diplomat.

From there…well, his family was nothing, if not ambitious.  They’d no doubt seen a White House in his future.

But there were few things that could make a man view his life with the stark clarity of five weeks of brutal torture.

By the time he’d managed to escape the caves, he’d known he was done living his life to please the precious St. Clair clan.

Instead he’d banded together with his friends, Rafe Vargas, a covert ops specialist, Max Grayson who was trained in forensics, Hauk Laurensen, a sniper, and Teagan Moore, a computer wizard, to create ARES Security.

He’d wasted too much of his life.

He intended to leave the past behind and concentrate on his future.

Of course, there was an old saying about ‘the best laid plans of mice and men…’

The Saloon was the sort of bar that catered to the locals in the quiet, Houston neighborhood.

It was small, with lots of wood and polished brass.  Overhead there was an open beam ceiling, with muted lights that provided a cozy atmosphere and on the weekends they invited a jazz band to play quietly on the narrow stage.

Lucas spent most Friday evenings at the table tucked in a back corner.  It was unofficially reserved for the five men who ran ARES Security.

The men liked the quiet ambiance, the communal agreement that everyone should mind their own fucking business, and the fact that the table was situated so no one could sneak up from behind.

At the moment, the bar was nearly empty.  Not only was it a gray, wet Wednesday evening, but it was the first week of December.  That meant Christmas madness was in full swing.

Perfectly normal people were now in crazy-mode as they scurried from store to store, battling one another for the latest, have-to-have gift.  It was like Thunderdome without Tina Turner.

Currently Lucas and Teagan shared the bar with a young couple seated near the bay window at the front of the bar.  Those two were oblivious to everything but each other.  And closer to the empty stage was a table of college girls.  Already at the giggly stage of drunk they were all blatantly checking him out.  At least when they weren’t gawking at Teagan.

Both men were accustomed to female attention.

Teagan was a large, heavily muscled man with dark caramel skin, and golden eyes that he’d inherited from his Polynesian mother.  He kept his hair shaved close to his skull, and as usual was dressed in a pair of camo pants and shit-kickers.  He had an aggressive vibe that was only emphasized by the tight T-shirt that left his arms bare to reveal the numerous tattoos.

Lucas St. Clair, on the other hand, was wearing a thousand dollar suit that was tailored to perfectly fit his lean body.  His glossy black hair was smoothed away from his chiseled face that he’d been told could easily grace the covers of fashion magazines.  As if he gave a shit.

His eyes were so dark they looked black.  It wasn’t until he was in the sunlight that it became obvious they were a deep, indigo blue.

Most assumed that he was the less dangerous of the two men.

But while the girls became increasingly more obvious in their attempts to attract their attention, neither man glanced in their direction.

Teagan because he already had a flock of women who included super-models, and two famous actresses.

To be honest, he wasn’t sure why.  He only knew that his interest in women hadn’t been the same since he’d crawled out of that hell-hole in Afghanistan.  Not unless he counted the hours he spent brooding on one woman in particular.

The one who got away.

Lucas gave a sharp shake of his head, reaching for his shot of tequila.  It slid down his throat like liquid fire, burning away the past.

Nothing like a twelve year old vintage to ease the pain.

“Another round?” he asked.

“Sure.”  Teagan waited for Lucas to nod toward the bartender, who was washing glasses at the same time keeping a sharp eye on his few customers.  “I assume you’re picking up the tab?”

Lucas cocked a brow.  “Why do I always have to pick up the tab?”

“You’re the one with the trust fund, amigo, not me,” Teagan said with a shrug.  “The only thing my father ever gave me was a concussion and an intimate knowledge of the Texas penal system.”

Lucas snorted.  It was common knowledge that Lucas would beg in the streets before he would touch a penny of the St. Clair fortune.  Just as they all knew that Teagan had risen above his abusive background, and temporary housing in the penitentiary to become a successful businessman.  The younger man not only joined ARES, but he owned a mechanic shop that catered to a high-end clientele who had more money than sense when it came to their precious sports cars.

Kill Without Shame is available in the following formats: