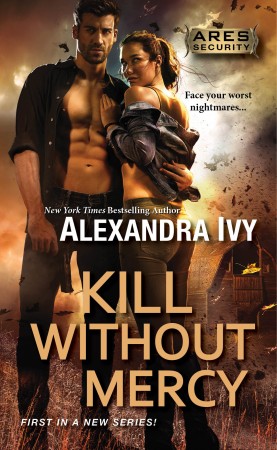 From the hellhole of a Taliban prison to sweet freedom, five brave military heroes have made it home—and they’re ready to take on the civilian missions no one else can. Individually they’re intimidating. Together they’re invincible. They’re the men of ARES Security.

Rafe Vargas is only in Newton, Iowa, to clear out his late grandfather’s small house. As the covert ops specialist for ARES Security, he’s eager to get back to his new life in Texas. But when he crosses paths with Annie White, a haunted beauty with skeletons in her closet, he can’t just walk away—not when she’s clearly in danger…

There’s a mysterious serial killer on the loose with a link to Annie’s dark past. And the closer he gets, the deeper Rafe’s instinct to protect kicks in. But even with his considerable skill, Annie’s courage, and his ARES buddies behind him, the slaying won’t stop. Now it’s only a matter of time before Annie’s next—unless they can unravel a history of deadly lies that won’t be buried. 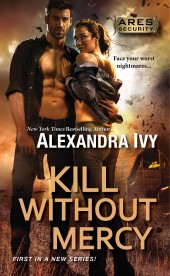 Few people truly understood the meaning of ‘hell on earth’.

The five soldiers who had been held in the Taliban prison in southern Afghanistan, however, possessed an agonizingly intimate knowledge of the phrase.

There was nothing like five weeks of brutal torture to teach a man that there are worse things than death.

It should have broken them. Even the most hardened soldiers could shatter beneath the acute psychological and physical punishment. Instead the torment only honed their ruthless determination to escape their captors.

In the dark nights they pooled their individual resources.

Together they forged a bond that went beyond friendship. They were a family bound by the grim determination to survive.

Friday nights in Houston meant crowded bars, loud music and ice-cold beer. It was a tradition that Rafe and his friends had quickly adapted to suit their own tastes when they moved to Texas five months ago.

After all, none them were into the dance scene. They were too old for half-naked coeds and casual hookups. And none of them wanted to have to scream over the pounding music to have a decent conversation.

Instead, they’d found The Saloon, a small, cozy bar with lots of polished wood, a jazz band that played softly in the background, and a handful of locals that knew better than to bother the other customers. Oh, and the finest tequila in the city.

They even had their own table that was reserved for them every Friday night.

Tucked in a back corner it was shrouded in shadows and well away from the long bar that ran the length of one wall. A perfect spot to observe without being observed.

And best of all, situated so no one could sneak up from behind.

It might have been almost two years since they’d returned from the war, but none of them had forgotten. Lowering your guard, even for a second, could mean death.

Tonight, however, it was only Rafe and Hauk at the table, both of them sipping tequila and eating peanuts from a small bucket.

Lucas was still in Washington D.C. working his contacts to help drum up business for their new security business, ARES. Max had remained at their new offices putting the final touches on his precious forensics lab, and Teagan was on his way to the bar after installing a computer system that would give Homeland Security a hemorrhage if they knew what he was doing.

Leaning back in his chair Rafe intended to spend the night relaxing after a long week of hassling with red tape and bullshit regulations that went into opening a new business when he made the mistake of checking his messages.

He tossed his cellphone on the polished surface of the wooden table, a tangled ball of emotions lodged in the pit of his stomach.

Across the table Hauk sipped his tequila and studied Rafe with a lift of his brows.

At a glance, the two men couldn’t be more different.

Rafe had dark hair that had grown long enough to touch the collar of his white, button down shirt along with dark eyes that were lushly framed by long, black lashes. His skin remained tanned dark bronze despite the fact it was late September and his body was honed with muscles that came from working on the small ranch he’d just purchased, not the gym.

Hauk on the other hand had inherited his Scandinavian father’s pale blond hair that he kept cut short and brilliant blue eyes that held a cunning intelligence. He had a narrow face with sculpted features that were usually set in a stern expression.

And it wasn’t just their outward appearance that made them so different.

Rafe was hot tempered, passionate and willing to trust his gut instincts.

Which was exactly he was a successful sniper. Rafe, on the other had had been trained in combat rescue. He was capable of making quick decisions, and ready to change strategies on the fly.

Rafe grimaced. “The real estate agent left a message saying she has a buyer for my grandfather’s house.”

Hauk looked predictably confused. Rafe had been bitching about the need to get rid his grandfather’s house since the old man’s death a year ago.

“Shouldn’t that be good news?”

“It would be if I didn’t have to travel to Newton to clean it out,” Rafe said.

“Aren’t there people you can hire to pack up the shit and send it to you?”

“Not in the middle of fucking nowhere.”

Hauk’s lips twisted into a humorless smile. “I’ve been in the middle of fucking nowhere, amigo, and it ain’t Kansas,” he said, the shadows from the past darkening his eyes.

“Newton’s in Iowa, but I get your point,” Rafe conceded. He did his best to keep the memories in the past where they belonged. Most of the time he was successful. Other times the demons refused to be leashed. “Okay, it’s not the hell hole we crawled out of, but the town might as well be living in another century. I’ll have to go deal with my grandfather’s belongings myself.”

Hauk reached to pour himself another shot of tequila from bottle that had been waiting for them in the center of the table.

Kill Without Mercy is available in the following formats: