IF YOU’RE ON HIS LIST
A woman’s naked body is discovered, cold and pale as the surrounding snow—except for the crimson scarf around her neck. The weeks that follow bring more victims and evidence of a terrifying pattern. The killer has a list. And every woman on it will get what she deserves . . .

YOU’RE AS GOOD
Dr. Lynne Gale followed in her father’s footsteps to become a vet in Pike, Wisconsin. For years, she’s had little contact with Kir Jansen, son of the town’s late sheriff. Suddenly he’s back, insisting that Lynne’s in danger. She can’t believe anyone would target her, but someone is hunting the women of Pike, savoring every last moment.

AS DEAD
Kir hoped that his father’s frantic calls about a serial killer were just an old man’s delusions. But the body count doesn’t lie. In this quiet town, a monster stalks and kills. And soon, Lynne’s will be the last name on his list . . .

“A satisfying mystery … Ivy’s clever foreshadowing keeps the tension high throughout this fast-moving tale, and the romance sizzles.”
—Publishers Weekly 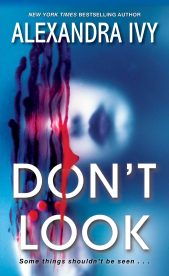 Eyes aren’t the windows to the soul, funerals are.

They reveal precisely how the deceased lived their lives, and how those who remain behind want them to be remembered.

Some are glorious celebrations of a generous heart. Some are garish displays of wealth and power. Some are small, intimate gatherings that are too painful to be shared with others.

There was no other way to describe it.

Standing next to the open grave that had to be chiseled into the frozen ground, Kir Jansen cast a restless glance around the smattering of guests. Pike, Wisconsin was a small, rural town in the heart of dairy country where neighbors were closely acquainted with one another, but Rudolf’s last eighteen years had been a downward spiral into the dark chasm of alcoholism. He wasn’t surprised that there weren’t many who were willing to brave the bitter January weather.

His attention moved to the preacher who was reciting a prayer in a monotone voice.

Pastor Ron Bradshaw was a scrawny man in his mid-thirties with pasty white skin and dark hair that looked as if it’d been trimmed with a pair of dull scissors. He’d kept the service blessedly short, merely mentioning the deep loss that would be felt by Rudolf Jansen’s family and community at his death.

Kir didn’t mind that there hadn’t been any mention of the positive aspects of his father’s life. Although there had been plenty of things to make a man proud.

Rudolf had once been a highly respected sheriff in Pike with a wife and son he adored. It wasn’t until he’d been attempting to arrest a petty drug dealer that his life had gone in the crapper. The shootout had left the criminal dead and Rudolf with a bullet in his brain that had forced an early retirement. Without the job that had been at the core of his self-worth, nothing had been the same.

Shuffling through the old memories to happier times had felt like ripping open ancient wounds to Kir as he’d prepared to attend the funeral. He’d tucked away his life in Pike the day he’d packed his bags to head to college in Boston. And he’d never looked back. Being forced to recall the childhood days when he’d been a part of a loving, secure family had only seemed to emphasize what he’d lost.

With a last plea for Rudolf’s salvation, Pastor Bradshaw motioned that the funeral was over and Kir turned to greet the mourners with grim determination. It was the least he could do after they’d braved the brutal weather to pay their respects.

First up was a distant cousin, Dirk Jansen. He was a large, gruff man in his late sixties who had visited Rudolf the last Sunday of every month. He called it his family duty to try and make Rudolf repent his evil ways. Kir’s father had called it a pain in his ass.

Now Kir politely shook the man’s hand even as he blocked out the droning lecture on the damaging effects of alcohol. The idiot had no idea he was far more a pariah in this small community than Rudolf had ever been. A perpetual drunk was an annoyance, but there was nothing worse than a pompous blowhard.

Dirk at last moved on to allow the clutch of elderly women to surge forward en masse. Kir assumed they attended every funeral in the area, regardless if they personally knew the deceased or not. He accepted their sympathies with a distracted nod and barely noticed as they scurried toward their waiting cars.

Instead his focus was locked on the young woman who was holding out a slender hand. Kir experienced a strange sensation as he reached to squeeze her fingers that were covered in a leather glove and skimmed a quick glance down her slender body.

Dr. Lynne Gale was a tiny woman with light brown hair she kept pulled into a messy ponytail. Her skin was pale and smooth with a smattering of freckles across the bridge of her slender nose, making her look like a teenager although he knew she was just a couple grades behind him in school. Which meant she had to be at least thirty. Her eyes were dark and penetrating and surrounded by long lashes he suspected were real. He’d never seen this woman wearing makeup when they were younger, or later when they crossed paths during his infrequent trips to visit his dad.

To combat the bitter cold, she was wearing a sensible parka that fell to her knees and a pair of heavy snow boots.

There was a gentle sympathy in her voice that threatened to bring the tears to his eyes that had been lacking during the preacher’s sermon.

His father had always admired Lynne. He called her a traditional small-town girl with a big heart. It was true she had a big heart, but there was nothing traditional about her. From a young age she’d been blunt and opinionated, and ruthless when it came to protecting the vulnerable. Especially if they happened to be furry.

It hadn’t always made her a favorite with the other kids, including himself. Now that he was older, it was a trait he truly admired. You always knew where you stood with Lynne Gale.

He cleared his throat, forcing himself to release his grip on her fingers. “Thank you for coming, Lynne.”

She shrugged. “My father and Rudolf were friends their entire lives.”

A bittersweet sensation tugged at Kir’s heart. Her father had been the local vet, and like Rudolf, his wife had walked out on him, leaving behind a young daughter to raise.

“Gavin was one of the few people in this town who stood by my father,” he murmured. “I’ll never be able to repay his loyalty.”

“He sends his sympathies.”

“I assume he’s still in Florida?”

“Yeah.” Lynne wrinkled her nose that was pink from the cold. “He hated to miss the funeral, but it’s hard for him to travel after he fell and broke his hip.”

“I’m relieved he didn’t risk the trip,” Kir assured her, glancing toward the thick layer of snow that coated the landscape in white. It was beautiful, but deadly. “This weather isn’t fit for retired veterinarians.”

“It’s true that he prefers the warm beaches these days.”

“Who wouldn’t?” He glanced back at her. “I can’t believe you stayed here when you could be living in the sunshine.”

“It’s home,” she said without hesitation.

Kir flinched as her words struck a raw nerve. Pike had once been home. Until the night his father had been shot. And Boston… Well, it was where he lived. He wasn’t sure that qualified as being his home. “For some.”

“I suppose you’ll be returning to Boston?” she asked, as if sensing she’d unwittingly intensified Kir’s sense of grief.

“In a few days. I want to clean out the house and talk to a realtor about putting it on the market. I hate to have it sitting empty.”

“If you need anything, just give me a call,” she told him.

They were the customary words offered at funerals. Pleasant platitudes. But suddenly Kir was hit by an overwhelming desire to see this woman again.

He wasn’t sure why, he just knew that he had an urge to connect with someone in Pike before he walked away forever. And there was always the possibility that she might have talked to her father or seen the older man. Kir needed…what? Closure, perhaps. He felt as if his anchor had been cut and he was floating in a sea of regret, guilt, and something perilously close to relief that he would never see his father suffering again.

“How about lunch tomorrow?”

She blinked, clearly caught off guard. “I usually eat something in my office at the clinic.”

“Good.” His tone left no room for her to politely wiggle out of his invitation. “I’ll bring my famous deconstructed sushi on pain de seigle.”

She blinked again. This time in confusion. “Excuse me?”

Her lips quirked in a genuine smile. “Okay. I usually take a break around noon.”

She turned to scurry toward the red truck parked near the road. Kir watched her pull away before he turned to face the man who was stoically waiting near the open grave.

“Thank you, pastor,” he said, forcing himself to move forward, holding out his hand.

“I was pleased to be able to help in your father’s time of need.”

“I appreciate you stepping in on short notice.”

The clergyman lifted his brows at Kir’s words. “It wasn’t.”

Kir dropped his hand and stepped back. He didn’t want to stand where he could see the glossy casket that was waiting to be covered by the piles of frozen dirt. It somehow made his father’s death irrevocable.

Stupid, but there it was.

“I beg your pardon?” he asked, confused by Bradshaw’s response.

“Your father asked me if I would officiate his funeral service.”

Don’t Look is available in the following formats: