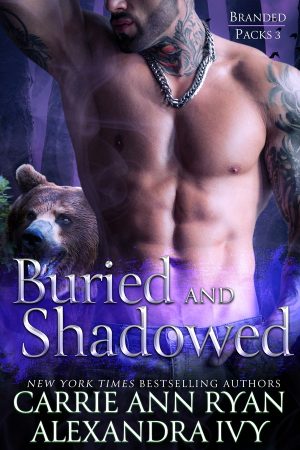 Gibson Barton knows his Pack is on the verge of something they will never be able to prepare for: a chance at freedom. Yet when he’s finally able to open his eyes to what might be his fate, it could be too late.

As a submissive wolf of her Pack, Mandy Calhoun has always only watched Gibson from afar. Because of her fears, she hasn’t let her intentions toward him—or the other in her sights—be known.

Oliver Dare is the Foreseer of the Ursine Pack, and knows with each vision, his death is that much closer. Yet he cannot see his own future—or that of the two wolves who have been thrust into his path.

There is danger lurking in the den, and as the three learn to process their emotions and navigate their temptations, they’ll have to fight for something they never knew they had—or sacrifice it all for a purpose far greater than their own destinies.

Sinclair, Alpha of the Unseen Pack, is determined to destroy the Shifter Accommodation Unit. He understands that his people will never be free until the truth is revealed and their enemies are brought out of the shadows and exposed to the public. Unfortunately, the human female who has been secretly working with him has disappeared, and his priorities must shift slightly. He’s resolved to track her down, and not just because she has the information he needs.

Mira Reese isn’t stupid. She’s painfully aware that the sexy shifter she’s been working with has been using her fascination for him to gain access to the CDC computer system. But that doesn’t stop her from helping Sinclair. Not when it allows her to be close to him. But after the CDC kidnaps her, she realizes that this isn’t a game. She’s a potential savior for the future of the shifters—and perhaps especially the loner wolf who stirs her passions.

Buried & Shadowed is available in the following formats: