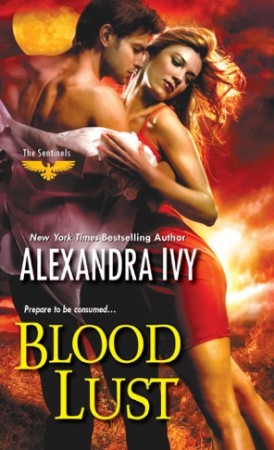 Blessed and cursed by their hidden abilities, the Sentinels have no choice but to live, and love, on the edge of humanity…

The Sentinel assassin, Bas, is facing the greatest challenge of his outcast existence. His young daughter, Molly, has been kidnapped. But her disappearance has brought the return of her mother, Myst, whom Bas has never forgotten–or forgiven.

Haunted by a vision that she’s destined to create a weapon that will destroy thousands, Myst was never impulsive–until she met the irresistibly handsome Bas. But with the Brotherhood, the enemy of the high-bloods hunting for her, Myst had to stay on the run, to keep her child, and the world, safe. Now, with the most important thing in both their lives at stake, she and Bas must embark on a treacherous journey to save Molly, to confront the truth of Myst’s fate–and to face their fierce desire for one another. 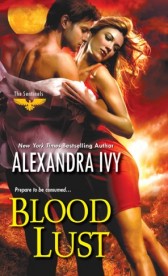 It’d been over a century since the high-bloods had revealed themselves to the norms.
In that time they’d established Valhalla, the main compound for the high-bloods, and built it smack-dab in the middle of the United States, as well as several satellite compounds around the world.
It was a way to try and convince the mortals that the witches, healers, psychics, necromancers, telepaths and clairvoyants were just like them…only with special powers.
And that the monk-trained warriors called the Sentinels could be trusted to maintain order among the high-bloods.

What they didn’t bother to share, was that there were several high-bloods with rare, sometimes dangerous powers that were kept hidden from sight. And that while the guardian Sentinels who were covered in intricate tattoos to protect them against magic, and the hunter Sentinels who remained unmarked to be able to travel among the people unnoticed, had been revealed along with the other high-bloods, there was another sect of warriors…the assassins.

The ruthless killers had been disbanded years ago, but a few had managed to survive.

And a rare few had managed to prosper.

Bas had retreated to his penthouse suite in the luxury hotel after fleeing from the clusterfuck that recently destroyed his highly profitable business.

Not that he gave a shit about the money.

He had enough wealth stashed in various properties around the world to last him several lifetimes.

And he wasn’t that troubled about ending his role as the leader of a renegade band of mercenary high-bloods who defied the laws of Valhalla to sell their various talents for an indecent price.

It’d been fun, not to mention highly profitable, to create his merry band of misfits, but he’d made than his fair share of enemies over the years. A fact that had come back bite him in the ass when a former employee had kidnapped his precious daughter and used her as leverage to try and gain control over a volatile high-blood who could have started an Armageddon.

Now all he wanted to do was find someplace safe to raise Molly.

He could, of course, have gone underground. Keeping a low profile was easy for a man who had his talent for altering his appearance. But he wasn’t going to drag Molly from one seedy location to another.

She needed love and peace and stability in her young life.

Along with her stuffed hippo Daisy.

Things he fully intended to give her. Once he figured out how to avoid being arrested and thrown into the dungeons of Valhalla.

He was in the process of plotting his future he heard the pitter patter of tiny feet.

He turned to watch Molly enter the salon, Daisy clutched in her arms.

Joy pierced his heart as he studied his daughter’s sleep flushed face surrounded by her silvery curls. Christ, he still got up a dozen times a night to make sure she was safely tucked in her bed. Molly, on the other hand, barely seemed to remember her time with the witch. Thank god.

“What are you doing up? Did you have a bad dream?”

She flashed a smile that could light up the world. “Mama called me.”

Bas swallowed a curse. Molly often spoke about Myst. Almost as if she was a constant companion instead of the woman who’d given birth to her and then promptly disappeared.

“Called you?” He gave a teasing tug on a silvery curl. “On the phone?”

She giggled, the dimple he loved appearing beside her mouth. “No silly. In my head.”

“It was a dream,” he gently assured her.

Her eyes that perfectly matched his widened. “No. It was real.”

“She talks to me all the time.”

Bas bit his tongue. He couldn’t tell his daughter that five years ago he’d had a one night stand…no, it hadn’t even been that.

Myst had come into his office, desperate for a job. She’d been a clairvoyant who had some talent for mindreading, but no ability to manipulate others. And she hadn’t been capable of providing a reading for the future.

He hadn’t had much choice but to tell her that he didn’t have a place for her on his payroll.
Not only because she didn’t bring the skills that could make his business money, but because he’d been rattled by his intense reaction to her fragile beauty.

He was nearly three centuries old. He’d had countless lovers.

Some had been passing acquaintances, some he’d enjoyed for several years.

But none of them had ever come close to making him a conquest.

Which was why he hadn’t been prepared when Myst had stepped into his office, nearly bringing him to his knees with the force of his instinctive, gut-wrenching desire.

Even now the memory of her beauty haunted him.

Her pale, exquisite face that was dominated by a large pair of velvet brown eyes. And the long, silvery-blonde hair that looked as if it was spun silk.

She was danger. Pure, female danger wrapped in the warm scent of honeysuckle.
Unfortunately, before he could get rid of her, Myst had caught him off guard when she’d burst into tears.

He might be a bastard, but he’d been unable to toss a sobbing woman out on her ass.

So instead he’d given her a good, stiff drink to calm her nerves. And then another.
And the next thing he knew they’d been naked on his couch and he was lost in the spectacular pleasure of her body.

Bas gave a sharp shake of his head.

He’d wasted too many nights recalling just how good it’d felt to feel Myst pressed beneath him, her legs wrapped around his waist.

The only thing that mattered was that she’d disappeared from his office the second his back was turned. And then, nine months later slipped through his security to abandon Molly in his private rooms.

What kind of woman did that?

“Okay,” he murmured, fiercely attempting to disguise his opinion of Myst. “What does she say?”

“That she has something she has to do, but she misses me,” Molly said. “And that soon we’ll be together again.”

“I don’t want you to be disappointed if she can’t come,” he said gently. He tenderly smoothed her silken curls. “You have me. And I’m never going away.”

“But she is coming.” She at the sound of the door to the suite being opened. “Now.”

Bas surged upright, his hand reaching for the gun holstered at the small of his back.

What the hell? How had an intruder gotten past his security system?

There was the unmistakable scent of honeysuckle drenching the air before a female stepped into the salon, dressed in a yellow sundress. Bas hissed, feeling as if he’d been punched in the gut.

She was just as beautiful as ever.

“Myst.” The name was wrenched from his lips.

Her delicate features were impossible to read. “Hello, Bas.”

He gave a shake of his head, trying desperately to dismiss his potent, intoxicating response to the sight of her.

“What the hell are you doing here?”

Her gaze shifted to the tiny girl standing beside him, a luminous smile lighting her fragile features.

“I’ve come for my daughter.”

Blood Lust is available in the following formats: