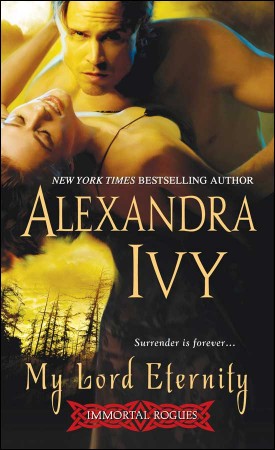 Alexandra Ivy, author of the Guardians of Eternity series, draws readers deeper into the world of the Immortal Rogues–three vampires entrusted to protect the future of their kind. . .

To other vampires, mortals are weak, uninteresting creatures. To Lucien Valin, they are infinitely fascinating. Especially Jocelyn Kingly–once the prize of London society, now an outcast. As the vampire assigned to guard her, Lucien is relishing his task. But her beguiling goodness puts her in terrifying danger. Not just from the traitor intent on claiming her mysterious amulet, but from the desire Lucien struggles to keep in check.

Youthful infatuation already cost Jocelyn her good name. But even with little to lose, instinct tells her that accepting Lucien as a tenant in her home is a devil’s bargain. As she roams London’s streets at night, helping the most wretched, she feels a dark force drawing near. And Lucien–magnetic, charming, irresistible–may turn out to be her savior, her lover, or the means to change her destiny forever.

My Lord Eternity is available in the following formats: